When fuel prices went sky high with no sign of coming down long term, fleets and fuel-using entities (like city governments) were forced to rethink their strategies on protecting their budgets through how they use their fuel. 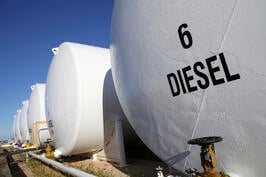 Fuel strategies that used to center around using fuel up in days or a few weeks at most now saw these groups buying larger amount of fuel when the price was low.  Thus enters the issue of long term fuel storage so it will do what they need it to do in the end.

These strategies revolve around resolving the chemical instability, preventing the effects of microbial activity in the fuel, and ensuring compliance with regulations.

How Long Can You Store Diesel Fuel For?

If you ask different people this question, you will likely get different answers. That's because the storage life of any fuel is dependent on the conditions. The military has an obvious interest in fuel storage, given what they do, so they've studied storage life of fuels pretty closely over the years. The key is keeping the fuel cool and keeping the fuel dry. Under ideal conditions, diesel fuel can be stored between six and twelve months. To extend the life past twelve months, even under the best conditions, it needs to be treated with fuel stabilizers and biocides. If the fuel can't be kept cool, below 70 degrees F consistently, twelve months is the longest reasonable estimate for storage.  Keep in mind that this is for diesel fuel, not ethanol blends or biodiesel blends.

The biggest benefit imparted by properly maintained storage tanks over time is the prevention of water contamination of the fuel. Obviously it is important to maintain the structural integrity of tanks, especially above-ground tanks that may have top openings which can allow rain water to contaminate the fuel if they deteriorate over time.

Experts recommend that you minimize the amount of space left in the tank over time; it is this space that will influence how much water from condensation accumulates in the fuel. The minimum amount of space needed depends on the tank configuration and the volume of fuel (because of expansion).

There are different regulations depending on if your fuel storage is above ground or underground. Technically, it is defined as underground if more than 10% of the tank is below ground. Different states have different requirements as far as measures a facility has to have in place to prevent leaks and spills while addressing corrosion problems that may develop over time. And there are federal regulations in place that are governed and enforced by the EPA.  So a facility that seeks to save money through fuel storage will need to weigh the costs of compliance with thes measures to assess the overall ROI of what they're doing.

Biocides have become essential tools in diesel fuel storage because the removal of sulfur from ULSD makes the fuel a lot more prone to microbial activity than it used to be.  So while it is important to control the water accumulation inherent in fuel storage, even if you do that diligently, you've got more chance of a microbial problem emerging, in no small part because not everyone in the distribution chain may be watching things as closely as you may be.

One thing to keep in mind is that the presence of "biofilm" or biological mass produced by the organisms can affect how quickly a biocide kills microbes in fuel. In situations like this, a storage system can be reinfected after treatment unless the biofilm is broken down so the microbes can be penetrated by the biocide. In instances of severe biofilm accumulation, the tank would have to be mechanically cleaned.

Stability treatments target oxidation reactions and acid-base reactions in stored fuels. As you can guess, oxidation of the fuel happens when it is exposed to oxygen. The oxygen interacts with pre-existing "reactive components" that are already present in the fuel. This sets off chain reactions that turn healthy stable molecules in the fuel into unstable reactive molecules, eventually leading to fuel darkening and stratifying.  Antioxidants are effective at interrupting the chain reactions at the beginning so they don't happen further down the line. Fuel stabilizers also prevent harmful acid-base reactions in the same way, by reacting with acidic precursors in the fuel to prevent them from further reacting with other fuel agents.  This is especially important when the fuel has been exposed to certain metals like copper and iron, as these metals catalyze or accelerate these harmful reactions. It only takes a minute amount of dissolved metal to speed these reactions up.  You can use an antioxidant stabilizer that contains a metal deactivator to blunt this problem.