Back in 2013, we published a blog post describing some anticipated and influential trends that were likely to be seen with stored fuel for the coming year. We talked about the pending increase in biodiesel blending that was hinging on the EPA increasing their goal of more than 1 billion gallons of biodiesel fuel in use across the country. This would have been an increase of 28% over the previous year. The second impending issue cited in our 2013 blog piece was the closing of the compliance window for falling in line with strict new storage tank rules. These rules were designed to make sure that storage tank designs and systems were updated and better able to prevent problematic events like fuel leaks.

So what are we looking at for the 2018 year? What’s on the horizon for the thousands of businesses and entities and the millions of people that store or use stored diesel fuel? Let’s crack open the Magic 8-Ball and have a look. It is decidedly so……

This is actually a trend that is expected to continue from the recent past. Scientists and fuel microbiologists are only now even beginning to scratch the surface as far as understanding the scope and extent of the potential issue of fuel storage tank corrosion. They know that ultra-low sulfur diesel (having little resistance to microbes) is linked to storage tank corrosion, as is the influx of ethanol contamination in diesel storage tanks (often because trace contamination).

The EPA is in process of collaborating on additional studies to try and clear up some of the mystery that still exists surrounding why fuel storage tanks are corroding the way they are. Why we’re seeing some much vapor space corrosion damage. Is it entirely due to the storage tank microbes or is it something else?

Hopefully 2018 will see some of these questions answered.

More Biodiesel In Our Diesel Fuel 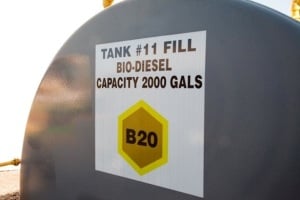 It’s been true for some time now that virtually all on-road diesel fuel contains at least a little bit of biodiesel. If the percentage stays below 5%, the fuel is considered, legally, the same as diesel fuel. And this means they don’t have to disclose the biodiesel amount.

According to the rules set down by the Renewable Fuels Standard, the percentage of biodiesel included in diesel has been steadily rising. In 2014, The RFS projected a national average of 2.78%. That went up to 3.19% the following year. It crossed the 4% threshold in 2017. The projection for 2018 is a national average of 4.46%, the highest it’s ever been. And it’s projected to exceed 5% by 2021.

Of course, these projections rely on knowing the amount of conventional diesel fuel that will be used in a given year. And we have the concurrent trend that diesel engines are getting more and more efficient, every year. So it’s possible that these percentages may end up even higher than expected, if the total amount of diesel fuel doesn’t rise as quickly as they might have projected in years past.