Any time you observe black smoke from diesel engines, it’s a sign that the fuel is not being fully burned. 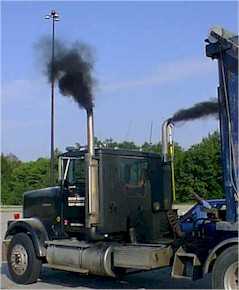 Sometimes this can be due to a mechanical defect in the engine preventing the full and ideal burning of the petroleum.  If you have the right amount of petroleum in a gaseous state (like when an injector sprays or atomizes fuel into a combustion chamber) mixing with the right amount of oxygen under the right conditions, the fuel burns completely to produce carbon dioxide, water, and a boatload of heat.  So an engine that is operating correctly won’t have black smoke coming from it.

But it’s not always due to the engine. If the fuel itself isn’t the right quality, it’s not going to burn properly in whatever engine you put it in.

This is the concern from users who store fuel.  They spend, many times, a sizeable investment for thousands of gallons of diesel or biodiesel or HFO, for use at a later time. If something happens to that fuel in storage, its combustibility quality can change and it can make black smoke. Black smoke leads to injector and engine deposits, subpar performance, less mileage, shortened DPF life – all because the fuel degraded in storage.

So what can you do to keep this from happening to your stored fuel?

To keep your fuel from making black smoke after storage, there are a few things to do to protect its integrity in the storage tank.

Stable Fuel Is What You Want

The biggest reason you get black smoke from stored fuel is because it’s become unstable due to exposure, over time, to oxygen, water, light and heat. As it’s been sitting in your storage tank, chemical reactions have been breaking down the stable elements of the fuel. Fuel that’s dark is likely undergoing stratification, and the elements making the fuel dark will be the ones causing back smoke when it’s used.

The solution is to treat the fuel with a stability treatment. The most effective stability treatments combine a package of antioxidants and dispersants and antiperoxidals.  The antioxidants and antiperoxidals specifically target and stop the chemical reactions in the fuel that turn one reactive element into a million of them.  Fuel instability is caused by chain reactions in the fuel. The nature of chain reactions mean if you stop the first one, you prevent the chain from ever forming.  That’s what you want to do here.

Dispersants are also important in these stability packages because they latch on to any particulates or unstable heavy molecules that may have formed and they keep them separate. If they’re separated in the fuel, they can’t stick together, grow larger, and form sludge.

Kick Microbes Out Of The Party

Microbes are the 2nd biggest problem in storage tanks.  If there’s any water in your storage tank currently, you probably have microbial colonies breeding in there, right now. And microbes are a big factor in black smoke because they make biomass (which causes filter plugging), consume elements of the fuel, and excrete acids which break down fuel quality and make it more likely to burn with black smoke.

When you follow both of these recommendations, make sure you do the following: