What was gas like back in the day when antique cars were in their prime?

It’s an interesting question to consider – we sometimes think that gas is gas, that it’s always been the way it is now. 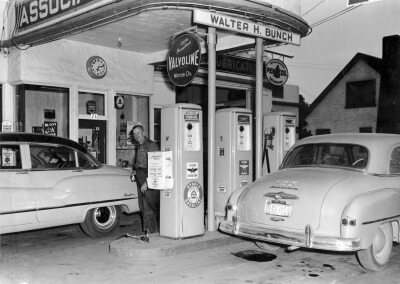 Truth is, the gas you would have used many decades ago is substantially different than the gas you have access to now. Let’s talk about what changed over the years to make the gas of today different from the gas that antique and classic cars would have been raised on.

In one sense if you’re talking about its combustion properties, gasoline cannot have changed all that much. It needs to have a certain autoignition temperature, flash point, vapor pressure, and distillation curve properties in order to burn properly in a spark ignition engine.  The same would be said for #2 diesel fuel in a compression ignition (diesel) engine.

But gasoline has changed in several other substantial ways. And some of these can lead to undesirable effects in the way antique cars burn the fuel in their old school engines.

Back in the day, they used to get about half a barrel of “distillate” (gas and diesel) fuel out of each barrel of crude. But as demand for fuel has skyrocketed, they figured out how to squeeze more fuel out of the oil by using “cracking” process. While it’s great that they’re now able to make more fuel, the fuel of today has more unstable molecular content and doesn’t burn as cleanly as the fuel from decades past.

Today’s fuels would have a greater chance of making engine deposits in your antique car’s fuel system, if not for…… 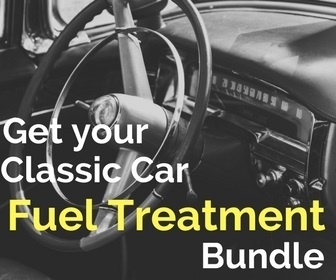 The fact that today’s gasolines are required to have a minimum level of detergency in them.  This started to be mandated in the 1990s as scientists recognized the link between engine deposits and incomplete fuel combustion and more air quality, especially in urban areas.  Today’s gasolines are required to contain injector detergents that keep modern injectors free of deposits, at least theoretically. There’s still some debate about whether the minimum required level is high enough. But it’s a substantial improvement over the fuels of the past that did not have them.

Chances are, your antique car doesn’t have fuel injectors.  But that doesn’t mean the injector detergents won’t have a beneficial effect. They will still clean out certain kinds of deposits that may form in your antique car’s engine.

The Addition of Ethanol and Change in Gas Composition

It’s virtually impossible to find any on-road gasoline today that doesn’t contain up to 10% or more of ethanol. This started being phased in in the mid-2000s in response to governmental requirements to add oxygenates to the gasoline to help with emissions.   Today’s gasolines also have higher aromatic content than gasolines from decades past.

The higher aromatic content and the ethanol content in today’s gasoline can damage fuel system parts over time because of its corrosiveness and its tendency to attack and soften plastic and rubber parts, especially old style carburetor floats and gaskets.

Classic car engines also may have driveability issues on today’s ethanol blends because of the difference in energy content of the fuel.

The vapor pressure of winter ethanol-blend gasolines is higher than it used to be. That means you have a higher chance of having vapor lock if you were to drive your classic car using winter gasoline.

The recommendations for preventing vapor lock center around keeping the engine compartment as cool as possible. So you want to make sure you have proper air flow and your coolant system is clean.  If you’re driving in the summertime and you stop at a rest area, it’s a good idea to open the hood to let heat escape, to prevent vapor lock in the summer. Finally, consider installing an electric fuel pump. Those can go a long way towards mitigating vapor lock in classic cars.

You may be interested in these posts on classic cars: