Who's against E15? Motorcyclists and Antique Car Owners for a few. 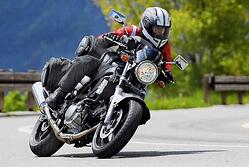 Back in late June, Washington D.C. was filled with concerned citizens speaking out to Congress about their concerns over the effect of E15 ethanol gasoline on motorcycles and antique cars.

The event was sponsored by the American Motorcyclists Association (AMA) and was an overall call for independent testing of the safety of E15 before being allowed to be sold at retail gas stations.

E15 is currently approved for use in cars made after 2001. But there's a large hole in the market with respect to motorcycles, ATVs and small engines, most of which have seen catastrophic damage from the effect of E15 fuel.

Not only are the AMA and classic car groups concerned about E15 damage, they also expressed concerns about consumer confusion at the gas stations that are selling E15, maintaining that a lot of consumers, motorcycle rider and others will mistakenly fill their tanks with E15 when they don't intend to, leading to big and unexpected problems.

E15 fuel is very problematic for classic cars, too, because they aren't made with materials designed to withstand ethanol solvency. And nobody wants to risk the health of an $80,000 classic Mustang with a $50 tank of ethanol gas.

Congressional Leaders Join Their Constituents To Speak Out Against E15

The big rally on Capitol Hill wasn't just made up of cycle riders and old car enthusiasts. A number of members of Congress attended, including Rep. Jim Sessenbrenner of Wisconsin. Rep. Sensenbrenner relayed the troubling news that he had already sent out letters to every major automaker as E15 began being pushed, and the news he got was troubling, indeed. He said every automaker replied back that using E15 would damage engines and void warranties.

One can only hope that those in Washington will look past some of the groups funding their campaigns and start paying more attention to their constituents.

You may also be interested in these other articles: