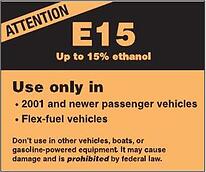 Sometimes we throw around terms with the assumption that the average person knows exactly what we're talking about.  Since our goal here at the Bell blog is to keep you informed, we figured it might be useful to explain a few common terms that get used a lot, but which might be confusing for people who don't work everyday in these arena.

Biofuel - this is a common term that includes all kinds of fuels created from biological sources, but which are used alongside petroleum fuels like gasoline or diesel fuel. Ethanol and biodiesel are both biofuels. All biofuels are not solely ethanol or biodiesel.

E10 or E15 - the 'E' refers to ethanol. The number refers to a percentage of volume of the ethanol in a blend of gasoline. So E15 means a gasoline blend that is up to 15% ethanol by volume.

B10 or B20 - same concept as with ethanol, but the 'B' refers to biodiesel. So B20 is diesel fuel that has up to 20% of its volume made up of biodiesel instead of petroleum diesel.

Biodiesel - Contrary to popular conception, biodiesel is not diesel fuel with converted oil. Biodiesel legally refers to oil or fat (like fry oil or soybean oil) that has been chemically converted to create something that burns like diesel fuel in a diesel engine. 'Biodiesel' does not refer to the blend of diesel fuel and the converted fat. In that case, you're talking about a 'biodiesel blend'.

Ethanol Mandate - this is a term used by analysts and commentators to refer to laws that forces the sale of ethanol-blended gasoline in certain areas. There are numerous laws that could be slotted into this terms, but the most common one you'll hear about is the Renewable Fuels Standard - a legal directive by the United States Congress that requires x billions of gallons of biofuel to be blended into the national fuel supply in a given year in the future. That number is ramping up into the twenty billions in the very near future.