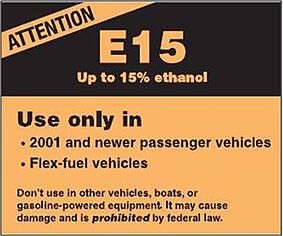 We’ve been talking for some time about the plans for 15% ethanol to replace 10% ethanol in our nation’s gas supply.  As these things go, the time for action has been a little slower than originally planned.  But make no mistake, the march toward increasing the percent of ethanol at your local pump by 50% is going forward and seem inevitable (at least under the current administration).

How you feel about that depends on whether you’re a driver or a farmer.

So you may wonder why this “approval” matters. Weren’t they already doing this? Well no, not exactly, but this step means they’re getting ready to.

Because ethanol is blended into gasoline as an addition (meaning it’s not something that was originally part of the refined fuel), the ethanol and the companies that make it have to go through an approval process similar to companies (like Bell Performance) that make other kinds of additives that go into gasoline. So the story is that the EPA spent time studying the issue and finally came to the conclusion that it would allow these companies to manufacture the ethanol that will eventually end up in your gas tank as part of the 15% blend.

So it’s a legal distinction more than anything else, but an important one.  The EPA approval means that E15, after months and months of talk and anticipation (not positive anticipation by many) is on its way to you and your local gas station.

You may ask, haven’t we heard that E15 was already in some gas stations? Yes you have, which means this is a lesson in the legalities of the approval process. Starting in 2010, the EPA did actually granted partial waivers to the 10% ethanol cap.  That allowed some stations to start supplying 15% ethanol in some areas, but only if they labeled it properly as not approved for certain kinds of vehicles.

This final approval (which was officially announced on April 2nd) means it’s going to be E15 for everyone now. Well, okay not EVERYONE, as there are currently a few exceptions.  Here’s what you need to know about these exceptions and other pertinent facts on E15: