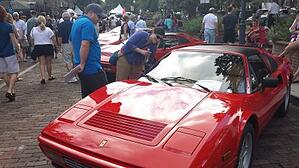 Bell Performance is going to be heading over to Winter Park, Florida for November’s Concours D’Elegance car show. One of the largest and most prestigious in the country, it’s an awesome opportunity to see the best vintage and classic cars, and also to rub shoulders with classic car owners and enthusiasts.

After we attended the Concours last year in both Winter Park and Amelia Island, we did a handful of blog posts looking at automotive history, pulling out some cool facts about people and cars like Henry Ford and the Continental Mark II.  The truth is always much more interesting than fiction, like when Henry Ford built his own steel mill to make a certain kind of steel he couldn’t get in the States. So in honor of all the classic and vintage cars at the Concours, here are some cool facts about some of the models that you’re likely to see there if you happen to make it over to Winter Park for the show.

There is actually a difference between the two.  Vehicles made between 1896 and 1915 are known as horseless carriages.  That means the 1909 Model T technically is one.  If you go from 1916 to 1925, those vehicles become officially known as “vintage” automobiles.

The signature car on the famous ‘80s show, the Dukes of Hazard, was a 1968-69-70 Dodge Charger known as The General Lee.  You probably already knew that. Depending on who you talk to, between 256 and 321 cars were used over the multiple seasons of the show.  Only about 17 of them are still in existence today, and not all of them in good running order.

The General Lee’s famous move was the jump.  Stunt drivers reportedly loved the flights but hated the landing. To keep the car from nosing over during a jump, the crew would use 500-1000 pounds of ballast (sand or concrete) in the General Lee’s trunk.  The jumps were violent enough that many of the cars actually bent on impact. So for all large jumps filmed for the show, the car used was immediately retired.

The Chevy Corvette was introduced as a concept car in 1953, named after a small maneuverable war ship. Harley Earl built the first one. Not only is it the official car of the Commonwealth of Kentucky (where they are exclusively built), Chevrolet supplied a number of Corvettes to NASA Astronauts in the 60s and 70s.  It was the brainchild of Jim Rathmann, a Florida Chevy dealer who also happened to be the 1960 Indy 500 winner. He was friends with Alan Shepard, Gus Grissom, and Gordon Cooper, and convinced the president of GM to green light a special program where Chevrolet gave two new cars to every astronaut each year. Most of them would pick one family car and one Corvette. Shepard and Grissom even used to race each other in their Corvettes on the beach. The police, apparently, turned a blind eye.

The Ford Thunderbird  started in 1955 and lasted a full 50 years until production ceased after the 2005 model. It is significant in auto history as being credited with creating the “personal luxury car” market niche. So it was the father to such later models by other makers as the Cadillac El Dorado, Lincoln Mark series (i.e. the Mark VIII), and, now, European/Japanese luxury imports like Lexus and BMW.  The Thunderbird was also unique in 1955 as it, along with the 1955 Corvette, were the only two-seater cars in America.  It was too large, slow and luxurious to be considered a sports car, and it did not have the performance to compare to a GT. So Chevy branded it as a “personal car” to set it apart.

It pretty much ruled the roost in its category for almost ten years, with its competitors being slow to react to a changing car market. That changed in 1963 when the Thunderbird had its first real competition in Buick’s Riviera.

Those of us that remember the 2000GT’s first model in 1967 remember the days when Americans scoffed at Japanese cars.  European sports cars ruled the day and American auto quality was king. Japanese cars were laughed at, viewed as “imitative”, boring and impractical.

The 1967 Toyota 2000GT changed the industry because it changed the way consumers looked at Japanese cars forever.  It was the first car that showed Japanese automakers could make a model that rivaled the European sports car. It compared quite favorably to, of all things, the Porsche 911. It also got a lot of exposure as the car of choice for James Bond in You Only Live Twice.  If you want to get one of these now, be prepared to spend upwards of $1.2 million at auction.

Being at the Concours is also a great chance to talk to these classic car folks and see how people are liking ethanol fuels and what they think about the gas that’s currently available to them.  Classic car owners are a really good group to talk to because they spend a lot of money on their cars and so they pay close attention to what goes into them.  It was virtually unanimous last year, among the people we talked to, that they all hate ethanol gas and are all looking for solutions to ensure it doesn’t wreck their vehicles.  Many of them were resorting to searching for non-ethanol marine gas.  Some of them were even looking were things to remove ethanol from gas – not something you can feasibly do with any fuel treatment.

You may be interested in these posts related to classic cars: