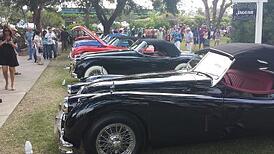 I f you saw Bell Performance's Facebook page on November 8 or 10, you probably saw a lot of pictures appearing of really expensive classic and performance cars that are way out of most people's price range. Such were the cars on display at the big Winter Park Concours d'Elegance car show on November 10th.

Every year in early November, more than 80,000 people flock to see the best of the best classic and performance cars, souped up and cleaned up and on display for judging and admiration with the general public.

Some people even brought their best friends to enjoy the show as well.

And since Bell Performance has been fixing fuel in classic cars since the days when they weren't actually classics, we were happy to be able to participate for the first time at the Concourse d'Elegance.

Jaguars and Aston Martins.  Bugatis and Chrysler's, even Teslas and Cadillacs - the best of the best classic exotic cars were on display at the Concours in Winter Park. What were some of our favorites?

We liked the 1910 Oakland Roadster - one of only two in existence in the world. And the 1930s model Bugatti was also awesome.

But we weren't just there to admire all of the expensive marvels of automotive engineering on display. We were also at the show to talk with people passing through and let the general public see a little more about what Bell Performance is doing in the way of treating fuel and solving problems for not just the expensive classic cars but also the family cars and trucks and small equipment that they use everyday on a regular basis.

Along the way, we got to answer some great questions from people who really did not know that much about what been going on with ethanol fuel in this country. Some of the more common questions we got were: why is ethanol bad? Do you have anything that will protect my _________? What is ethanol fuel doing to my friends car? How does what you have differ from Star Tron or Marvel Mystery Oil or whatever product I've been using up to this point?

So it was a lot of fun to meet and greet with everyone at the show and continue to get the word out about what we're doing everyday to try and solve problems and make life easier for everyone that uses fuel.

Maybe next year, we might see you there at the 2014 Winter Park Concours d'Elegance exotic car show.