How to Fix Bad Gas in a Car

When you’re asking the question ‘how do I fix bad gas in my car’, you’re talking about a different kind of situation than fixing bad stored fuel that’s been sitting in a storage tank or container for too long. The solutions are also a little different, too. 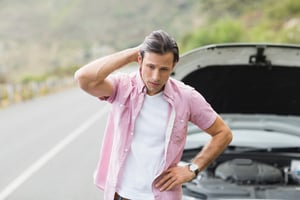 Fixing bad gasoline in a car is inherently more difficult than in an outside tank because you have less access to it. This limits, functionally, what you can do.

Let’s talk about some of the most likely “bad gas” scenarios and what to do about them.

Your car won’t start or struggles to run

This is a sign that your gas isn’t burning properly or something is interrupting the fuel’s flow to the combustion chamber. While those are somewhat generic diagnoses, that is basically what’s happened. Most of the most common bad gas situations involve one of these.

Phase Separation – We know that today’s ethanol gasoline can be prone to phase separation (where the alcohol separates from the gasoline and sinks to the bottom of the team) if it absorbs too much water from the atmosphere. But this problem is more commonly seen in storage tanks than in vehicles.  The gasoline is used up too quickly for this to happen in a vehicle, plus your gas tank isn’t vented to the outside so it’s unlikely the fuel inside will be able to pick up enough moisture over time for this to happen.

However, what might happen is you picking up some partially- or fully-separated fuel from some place else.  You’ll be simply adding the problem to your gas tank instead of having it develop there from the start. Either way, now you have to know what to do about it.

Unstable Fuel Leading To Injector Deposits – Your car’s injectors are the most crucial part to your car’s performance, as they deliver the fuel into the combustion chamber to be burned.  When you run fuel that’s “less than optimal” – maybe it’s old or getting dark – the fuel makes deposits in the injectors that interrupt the injector’s ability to spray the fuel in the best way possible.  This affects your car’s performance in noticeable ways (both while you’re driving and at the gas pump).

Accidentally Putting Diesel Fuel In Your Gas – It doesn’t happen very often, and it certainly isn’t something anyone does intentionally. You accidentally put the wrong kind of fuel in your car.  Now what?

What To Do If You Think You Have Bad Gas?

Diagnosing bad gas when it’s in your car is a trickier proposition than in a storage tank, simply because you can’t exactly draw a fuel sample and look at it. At least, not very easily.  So we end up making assumptions on what we think it is. The right solution will depend on what we think is causing the fuel problems we’re seeing.

First, the easy one.  If you’re pretty sure you accidentally mixed some diesel in with your gas, the best solution is going to be to drain the tank, flush the fuel system, and fill it back up with fresh fuel. But since you don’t want to want to drive it to the garage to have them do this, you’ll need to have it towed.

Some people will respond with “oh, it’s fine. My friend did this and he drove it to Albuquerque and nothing happened.”  The problem with relying on anecdotal solutions like this is you don’t know the differences between your situation and theirs. The only commonality is that you think they mixed diesel and gas. You could have four figure repair bills relying on the assumption you’re making in this case. It’s up to you if you want to take that risk, but the safest thing to do is not to drive the car.

If you think you have phase-separated fuel in your gas tank (i.e. you picked it up from somewhere else), the best solution is going to be to have it pumped out and replaced with fresh gas. Luckily, this isn’t as serious a problem as putting diesel in your gas. You could drive it to the station, although there is a chance that if there’s a lot of water in the fuel, it could damage your engine.  So we can’t tell you for sure to go ahead and drive it – you will probably want to have it towed just to be sure. But the good news is that the solution isn’t going to cost as much as fixing the diesel-in-gas problem – they won’t need to flush out your entire fuel system, they’ll just take the gas out of the tank and fill it back up with fresh gas.

What about fixing a “dark fuel” problem? Since the biggest problem with this is the deposits that will form in your injectors, the solution is to ramp up the detergency in your fuel by adding a detergent-based fuel additive.  A good detergent will help remove deposits as they form, keeping your injectors cleaner as you burn through this old fuel.

Keep in mind, though, that we’re not talking about adding a fuel stabilizer.  Stabilizers function to prevent the fuel from darkening and “going unstable”, but they do not reverse the process once it’s started. Once the fuel is old, aged, and dark, increased detergency is the solution.

What About Microbial Problems?

We saved this one for last…what if you think you have a microbe problem in your vehicle? The signs would be similar to some of the above – your fuel filter would be clogged and your car’s performance would suffer because of the inability to get fuel.  Microbial problems are somewhat unique in that because they involved living organisms, they won’t go away on their away even if you use up all the offending fuel. Your car’s fuel system is now infected. The only way to get rid of a microbial problem is to treat your car with a biocide.  This will kill the microbes, though you will need to change the fuel filter afterwards because the dead microbes will need to be filtered out by the filter.  One other caveat is that you will want to add the biocide to a gas can and mix it with fuel before adding that to your gas tank. The EPA doesn’t really like people adding bottles of biocide directly to their vehicle. But if you add the recommended amount to a gas tank and just add some fuel to that before treating your vehicle, you’ll be good to go.