Cars and light trucks dominate the US auto market. Drivers of these kind of vehicles all want the same thing – they want the most bang for their buck, and they want reliability from the fuel and from the vehicles that run on them. Fuel-related problems are never expected and always inconvenient for consumers and business people when they happen.

The majority of cars and light trucks in this country run on both gasoline and ethanol blends. This situation differs from Europe, where these type of vehicles can be found running on diesel and even LPG. While there are some diesel small trucks and a handful of diesel cars, LPG-powered vehicles are rarer still in the US. Gasoline and ethanol seem to rule the day here in the United States.

Drivers are consistently concerned about these issues concerning gasoline fueled vehicles which include:

This is the biggest concern for consumers. Fuel prices seem to resonate with consumers’ wallets to a greater extent than many larger expenses. That’s why drivers are always looking for things that will give them the extra edge and improve fuel mileage. Now that ethanol has come along (with its 3-25% drop in fuel mileage and fuel power), these same consumers are even more concerned.

Gasoline itself historically produces deposits that buildup in the valves, injector and combustion chamber. Historically these have been controlled by using additives added either at the refinery or by the driver themselves. But ethanol makes it a whole new ballgame. Vehicles made since around 2003 tend to do a decent job at resisting ethanol solvency. But for vehicles older than that, ethanol eats away at plastic and rubber seals and parts, dissolving them and really doing a number on your engine over time. This means increased maintenance and the possibility of real damage over time.

Water buildup in fuel and storage tanks also poses the potential for damage (because ethanol attracts water wherever it is). Cars and trucks don't have the same condensation issues as other engines have due to their sealed fuel systems. But they can easily end up with water contamination from water issues upstream in the ethanol gas supply chain. Sucking water into a combustion chamber at the least causes poor vehicle performance and at worst can blow a valve or cause some other costly mechanical failures.

Why you should choose Bell Performance to fix your fuel problems.

Bell Performance has been in the business of solving consumer fuel problems and bringing value to its customers for over 100 years. Bell Performance and its founder, Robert J. Bell, practically invented the fuel additive industry through his revolutionary additive designed for the Model-T cars (which ran on ethanol blends). So Bell products have a long and strong history of bringing quality, value and performance to consumers in gasoline and ethanol-burning vehicles.

How to Buy a Fuel Additive to Treat Ethanol 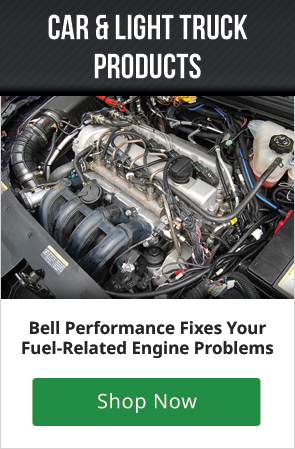