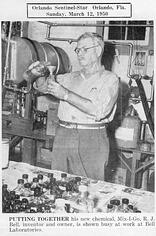 If you’re familiar with Bell Performance, you have heard more than a few times that Bell Performance “invented” the fuel additive industry.  It started in 1909 when Robert J. Bell came up with a detergent formulation that could be added to the gasoline and ethanol fuel that was being used in the new Model-T car. He originally called it OM-I-GO, and Bell Performance still has some examples of old OM-I-GO packaging and literature from way back when.

This detergent formulation was not the same multi-function product that you and I can buy today from Bell. No, the major step toward this improvement came 18 years later.  Robert Bell, being the inventor and chemist that he was, knew that he could improve on what he did before.  The “eureka” moment came in 1927 when Bell figured out how make water and oil mix together through chemistry.  Bell applied this surfactant technology to a project of improving the formulation to allow gasoline to absorb and suspend water.

And the Mix-I-Go formulation was born!

Some people ask if what they buy today is the same stuff Robert Bell put together in his lab way back in 1927.  The answer to that is yes and... no.  As the years pass, new and better technologies for combustion improvement and the ability to keep engines clean have been developed in the industry.  The Mix-I-Go formulation always looks to include the latest and most effective types of ingredients for our hard-working customers. 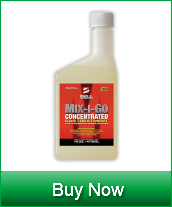