For hospitals and critical use facilities, care and husbandry of emergency stored fuel is a hotter topic than ever before. You can’t treat stored diesel fuel like you used to, and it needs maintenance like it never used to. There’s so much information out there, how do you know what to pay attention to? If you work at a hospital and you’re trying to keep everything running in the days of social distancing and pandemic contagions, you need to know how to cut through the noise and figure out where to start.

Updated for 2020, here are some guidelines to give you a start. 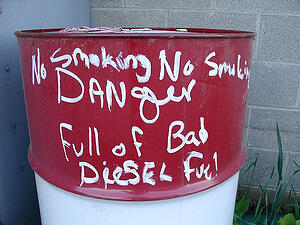 We’ve written a lot on the topic of diesel fuel storage in recent years.  Why fuels have changed.  The fact that hospitals have more rules governing their stored fuel and what they need to do with it. What problems those emergency fuels are prone to. What kind of chemicals may or may not be needed to treat them with.  Today we wanted to touch on a few different aspects of emergency diesel fuel storage, some things you may not know or realize.  There’s a lot of information out there and, sometimes, important considerations can get lost in the shuffle. Here are some things you can start with.

Biostats vs. Biocides: It's Important To Get It Right

Microbes in fuel are the hot trending topics for stored diesel fuels.  It should be clear that microbial contamination is a problem that must be dealt with to head off massive future problems.  This is just as true for hospital and other emergency fuel as it is with any other kind. To deal with microbial problems properly, you have to understand the difference between a biostat and a biocide.  Failing to know the difference between the two can spell big trouble, because you think you’re taking the right steps but may not be solving the problem at all.

A biocide is a chemical or substance (including another microorganism) intended to destroy, deter or exert a controlling effect upon a harmful microorganism, by chemical or biological means.

A biostat is a chemical or substance that relates to the conditions which make it easy (or more difficult) for microbes to reproduce and grow.  Something that makes it harder for microbes to grow, but which do not actually kill the microbes.

This is an important distinction. There are many chemicals in the marketplace that make “biocidal claims” in that they imply that if you use them, they will “get rid” of a microbe problem.  Or they make an explicit claim that, among other things, they will kill microbes or eliminate problems.  Another practice that falls under the “biostat umbrella” is the removal of free water.  Yes, it is important to remove free water from storage tanks with microbe problems – it’s one of the recommended best practices.  But removing free water doesn’t kill microbes. If anything, it’s a biostat practice. It seeks to change the conditions of the tank to (hopefully) make it more difficult for microbes to grow. But simply removing free water won’t kill microbes and won’t solve a microbe problem.

When you talk about killing microbes, that’s a biocidal claim because that’s what biocides specifically do. They kill microbes.  And when you have an active microbe problem in your stored fuel, you have to use a biocide to kill the microbes and stop their reproduction.  That’s the only solution that will solve your problem.

To solve microbe problems in stored fuel, be sure to use a biocide, not a biostat. And make no mistake, you must deal with them when you have them. Microbes are the #1 problem for stored emergency fuel. They’re a problem that will not go away without the right action.

Taking Care of Fuel Requires More Than One Thing

If we could boil down all of the information and “do-this-do-that” information out there on stored fuel, we’d say that keeping hospital and critical-use emergency fuel viable requires three co-equal branches of action. Or a three-pronged approach, if you will. Ignore just one part of the three and you’ll either miss something you should be doing or you’ll waste time and money, sometimes at the very time you can least afford to.

Fuel testing is the third arm and the one most overlooked. Probably because it’s the least understood.  Yet it’s arguably the most important because it’s the thing that tells you if you have a problem.  It’s the thing that helps direct you to take the right action for your emergency fuel.  How can we predict fuel problems when we may not be able to correctly observe or assess the real state of the fuel today?  Fuel testing is the only thing that can help you do that.

Given the limited resources you’re likely to have, we’d recommend you concentrate on three kinds of tests for your emergency fuel.

Microbial Testing - Microbial contamination is on the rise in stored fuels, along with associated problems like tank corrosion and particulate formation in stored fuels. It is not inaccurate to say that microbial contamination is the #1 problem facing hospitals, mission-critical installation, utilities – anyone with stored fuel. It’s on the rise and getting worse by the month.  The old school solution was to guess at whether you had microbes by pulling a fuel sample, checking to see if you had water in the tank, and whether your filters had anything strange in them. While those can be leading indicators, they’re not by any means foolproof. Any hospital or other kind of installation that has significant resources riding on their job performance really needs to move past these dark ages of “it looks funny” and into a more exact and accurate assessment.  Of the different in-field microbe tests, we think ATP-By-Filtration gives you the most accurate information in the least amount of time.

Stability Testing – Tests like Accelerated Oxidative Stability, Thermal Stability and the Petroxy stability test can be extremely useful in predicting what may happen to the fuel’s condition in the coming weeks. So they are a little different in that they don’t necessarily tell you, from a measurable standpoint, the exact condition of the fuel right now. They tell you what to expect with the fuel in the near future. This makes sense, since “stability” is defined as something’s ability to resist change. So you’re expressing the fuel’s ability to not change.

One thing to keep in mind with Stability Testing is that the right kind of test to do can depend on whether the fuel is ULSD or not, as well as if it contains a significant amount of biodiesel. What they’re finding is that the Petroxy stability test is actually preferable to the older Accelerated Oxidative Stability test (ASTM D-2274) because the older test was optimized for higher sulfur diesel fuels.

It’s recommended for you to have the stability of your stored fuel tested once or twice a year.

Water and Particulate Content – This is specified in the ASTM D975 requirements for diesel fuel. This test will tell you what the actual total content of water and particulate is in your fuel at the time of testing. So it’s not predictive as stability testing is, it’s descriptive.  And that’s important enough to know that the law says diesel fuel cannot have more than 500 ppm of water + sediment content in it at any one time.  If your emergency diesel fuel exceeds these, it’s going to cause problems with your equipment in multiple ways.

What should you do if you have a failing test in one or more of these areas? One could write books on that subject, so to be concise, a borderline stability test (not failing, but on its way) means the fuel needs stability and may benefit from filtration. If the stability test is a failing one, then you may have a window to use it up provided you don’t already have excess sediment formation.  If your Water and Particulate test fails for your emergency fuel, it needs mechanical processing to clean it, along with chemical application like stabilizer.  If you have a failing microbe test, you’ll need to apply biocide to kill the microbial contamination.

With all of these, you will want to have a post-treatment test done to verify your fuel is in the proper condition. Again, that’s the value of the testing arm of emergency fuel maintenance. No longer do you have to guess whether your emergency fuel is going to be up for the challenge.