Diesel fuel filtration is still somewhat of a black box to many diesel users.  They know it’s important but the details of it escape them.  That’s not to make them feel bad, though. Even some seasoned diesel mechanics, if you ask them basic questions about filtration like “what’s the micron rating of the fuel filters you use in your fleets”, they may not know the answer to that. 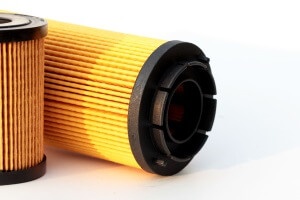 To keep ahead of a changing industry, it’s important to have a good grasp of diesel filtration and how changing diesel industry standards are being reflected in changing filtration standards as well. This should not be surprising.  Diesel engines continue to advance. They get more powerful. They get more expensive.  And so the need to protect expensive and complicated engines grows along with that.

Today’s new diesel engines are predominantly of the common rail engine design.  They’re more powerful and more efficient than ever. And they’re equally less tolerant of water and contaminants, especially considering their high pressure injectors operate at multiple times higher pressures than the older conventional diesel designs.  This means that diesel fuel and oil filtration, both in-vehicle and for stored diesel fuel, becomes more critical than ever. And it becomes useful to be familiar with filter ratings and how their effectiveness is measured.  What’s the difference between effective rating and beta rating? If a filter is “rated” at, say, 10 microns, what does that really mean?

How well a filter does these things is reflected in its ratings like Beta Rating, Nominal and Absolute Ratings, even Efficiency. Some of these ratings can be misused by filter manufacturers to fool the end user into thinking a filter is better than it actually is.

For example, you might have a filter advertised as a “10 micron filter”. This implies that the filter will capture (remove) particles as small as 10 micrometers (microns).  But does it actually mean this or does it mean something different? That’s where knowing the Absolute and Nominal and Beta ratings give you a more accurate and complete picture of just how well that filter is going to do what you need it to do.

Absolute Rating of a Filter

Absolute Ratings of filters are typically documented by using glass beads in a laboratory test. But you should know that the Absolute Rating of the filter isn’t always going to match up with the largest size particle that actually passes through a filter in real world conditions.  There are several reasons why we can say this.

First, the lab test to generate Absolute Rating is done at low pressure under calm, stable conditions.  In a real life filtration situation, the flow pressures are higher and there’s movement and pulsation that happens. This would cause some larger particles to go through the filtration medium.

Second, the filter you’re going to buy isn’t going to have completely consistent pore sizes.  And the shape of the filtration medium may not be uniform.  This creates the possibility that a larger-size particle can squeeze through one of these holes that you thought were too small for that to happen.

None of this is to say that, if you have a filter with an Absolute Rating of 10 microns, that it’s going to let the majority of particles 5x or 10x that size go through.  It doesn’t quite go that far. But the definition of Absolute implies that NO particle bigger than that size will go through.  In the real world, that’s rarely the case.

Along with Absolute Rating goes the filter’s Nominal Rating – the ability of the filter to prevent a percentage of particles of a certain size from getting through.  Unless the Absolute Rating, Nominal Rating has “degrees” associated with it; it's expressed in the context of particle size.   A nominal rating might be expressed as “95% of 8 micron”. As you might guess, that’s supposed to mean that filter prevents 95% of all particles 8-micron and larger from getting through.  But it also means that the filter allows up to 5% of those same particles (8 microns and larger) to pass through.

As with Absolute Rating, it’s not recommended to rely on Nominal Rating on its own because it can be skewed by changing the parameters of the test (like operating pressure and the concentration of different size particles).  So while having a Nominal Rating for the filter is better than having nothing, it’s not something you would rely on in a vacuum. Just like Absolute Rating.

Beta Rating: the Best of Both Worlds?

Given the constraints of these Absolute and Nominal filter ratings, the industry really needed a good test method that could overcome their stated limitations.  This need was met with the development of multi-pass testing, also called Beta Ratio testing.

This type of testing takes particules of known size and runs them through the filter in question.  Particle counters measure the number of particles of given size before the filter, and that made it through the filter (i.e. the filter didn’t filter them out).  The resulting Beta Ratio calculation indicates how well a filter controls particulates of a specified size, as well as the Efficiency of the filter at taking out the particles in question.

So a filter with a Beta Rating of 2 actually filters out 50% of the particles in question.  The higher the Beta Rating, the more effective the filter.  Another filter may have a Beta Rating of 50, which would mean that 100 particles were before the filter and 2 made it through. So the ratio is 100:2 or 50. It also means the filter caught 98 out of 100 of those particles, or 98%.  For both of those filters, their Efficiency ratings would be 50% for the first one and 98% for the second one.

For the best idea of how effective your fuel and oil filters are, be sure that take into account all of these kind of ratings, not just one.