When do you need an engine oil flush?

There’s an ongoing debate among gearheads regarding whether engine flush products are good or bad. And the answer to that depends on the situation it’s being used in.  Let’s bring you up to speed on what engine flushes are, when they’re used, and what to do vs. not do, if you decide they’re right for you. 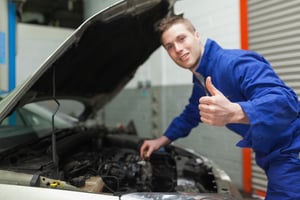 The first thing to remember is that an engine flush is an oil product, not a fuel additive. They’re intended to help remove sludge and heavy deposits that may have built up in the engine from the oil. So they're going to remove those deposits from the areas that the lubricating oil touches, not the fuel system.  Virtually all engine flush products are aftermarket solvent packages, and the majority of them are easy to use. They’re added to the engine oil (through the oil-filler port), then the engine is idled for 10 to 15 minutes. This gives time for the flush to mix with the oil, travel with the oil to the places where the deposits are, and dissolve and clean them. The oil is then drained along with (hopefully) much of the oil sludge that the flush was able to dissolve. You change the oil and replace the oil filter after that, and you’re done.

Today’s engine place a great deal of stress and demand on today’s advanced lubricating oils. If you drive in harsh conditions, oil sludge may form and accumulate in certain areas, restricting oil flow to the areas that need it, such as the upper valve train. That’s not good for the engine, by any means.

What are these harsh conditions?

Taking a lot of short trips and stop and go driving is surprisingly hard on the lubricating oil because moisture that builds up in the oil during the previous rest period won’t have time to evaporate and leave the oil. Hot and dusty environments are also hard on the engine oil.

Today’s modern oils already come with detergent and dispersant packages that do a great job of cleaning lubricated surfaces and keeping sludge deposits away from them. But these additives only last for so long. If you don’t change your oil as often as you should, that, too, can lead to oil sludge making its way to places you don’t want.

In these situations, it may be worthwhile to use an engine flush to remove that and help the engine get back to the condition it was when it ran at its peak performance.

Dissolving Vs. Breaking Up

One of the biggest objections that car enthusiasts may have with engine flushes is the fear that an engine flush will dislodge chunks of deposit from critical areas, causing them to shift to other, worse places where they can do great damage. Granted, that’s a worthwhile fear. Using an engine flush is supposed to extend the life of the engine, not end it.

Here is where it’s important to use an engine flush treatment that contains enough detergency to dissolve the sludge, not just break it up. An engine flush has to be able to dissolve or solvate the deposits. If the engine flush treatment is “underpowered” or isn’t given enough time to work, then some of the larger areas of sludge deposition may not get fully dissolved. And so you could have a situation where chunks or parts of that deposit get carried away to lodge in a more-damaging place.

So you want to make sure you use an engine flush that has the right amount of detergency power to do what it’s supposed to do.

There’s also a caveat about using an engine flush in an older engine with high miles. In these situations, the seals in the engine may be worn and leaking. But they, themselves, get “sealed” up with a combination of oil and sludge, essentially keeping them viable and masking their true condition.

For these kinds of engine issues, it’s actually recommended NOT to use an engine flush. You would find it best to leave well enough alone and not disturb the sludge that may be the only real barrier keeping oil from leaking past the seals in the older engine.

How Often To Use An Engine Flush?

Engine flushes are only needed to be used on a periodic basis. Ideally, you’d be changing your oil and taking proper care of the engine such that you wouldn’t have oil sludge building up regularly. You don’t need to use engine flushes with every oil change. Instead, consider using them once or twice a year, depending on how many short trips you take and whether you drive primarily in hot or dusty climates.