You accidentally left your gas cap off in rainy weather.  Or the gas station you fueled up at has a bad water filter and delivered you a slug of water with your fuel.  It's probably not condensation, since most vehicle fuel tanks are sealed systems not prone to water condensate like large fuel storage tanks can be.  Wherever it came from, water in your gas tank is a serious problem that needs to be addressed immediately. 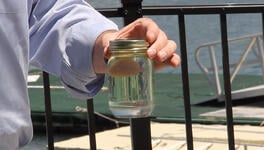 How do you know?

What are the symptoms of water in the gas tank? A good indicator is a sudden change in the performance of your vehicle. You try to accelerate and the car hesitates or sputters consistently.  You try to get up to highway speeds and the car just doesn’t want to cooperate.  Or maybe the vehicle sputters and then revs and jolts to higher speeds when it shouldn’t. It wasn’t like that yesterday, so what’s the deal?

If this happens shortly after you filled up at the pump, it's a good indicator you may have water in the gas tank.  The sputtering and hesitation comes from water slugs being sucked up to the injectors. Water doesn’t in the engine environment. For one thing, when water is injected into the combustion chamber, it turns to steam like you'd expect.  But steam doesn't compress or expand in the same way that ignited petroleum does, so the piston doesn’t have anything to push up again.  The sudden revs to high speed exhibited by your engine are probably from when the injector gets a new slug of fuel after spraying water.

Water in gasoline doesn't just cause issues in the cylinder; it can easily damage injectors if it expands rapidly in the injector tip (due to the inherent heat of the injector). And if it sits in the fuel system for a long period of time, it can even cause rust in your fuel system.

Getting the water out of the tank

Having a small (i.e. minute) amount of water in the gas tank is normal. All petroleum is going to contain a small amount of dissolved water in its composition. For E10 fuels, that's typically up to 0.5% by volume.

But such a small amount of water isn’t going to be enough to give the noticeable symptoms above.  What's going to cause you problems is when you encounter more significant volumes of free water.  And since you don’t want to keep trying to burn it, you need to get it out of the tank.

Large-scale business fuel users would probably drain the tank and replace the contaminated fuel with fresh fuel. But that’s not a feasible option for consumer drivers.  So the addition of a drying agent to the fuel is going to be your best solution to solving the problem.  Traditional drying agents like Dri-Gas have been around for years. DFS Plus from Bell Performance is also an excellent drying agent and works without using alcohol, which can be a consideration for older vehicles that have seals and fuel system parts made from more sensitive materials.

Should you be Worried about the 2020 Hurricane Season?
What does a fuel stabilizer do?
Fuel Additives for Storage Are Not All the Same
Stabilizer Additives For The Gas You Store At Home