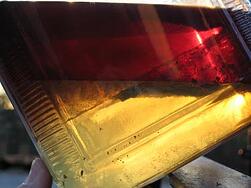 Gasoline and diesel fuels from the refinery are fairly pure mixtures that are designed to work well in today's modern engines.

Sometimes certain things get into the fuels that aren't supposed to be there. We've talked about lots of these in the context of other things over the three years (or so) that we've had the Bell blog.

The question for today is, what are some common "fuel contaminants" that can end up in fuel and which aren't supposed to be there? What happens when they hang around too long? What kind of problems could you see as a driver or a consumer?  Some of them are easy to guess but others can be things you might not have heard of.

Water is the most common contaminant to find and maybe the one that causes the widest array of problems. You can get water in fuel simply by leaving it alone, where the temperature changes in whateve storage container the fuel is in will cause condensation of humidity into the fuel supply. Water causes lots of problems, not limited to injector damage, phase separation of ethanol-blend gasoline, and is an essential part of the equation for what microbes need to grow and thrive in fuel.

Glycerin can be found in biodiesel where it causes problems like injectors deposits if it's present in excessive amounts. The reason you find it in there is because glycerin is the biggest waste product produced during the simple chemical reactions that turn a regular fat like fry grease into a biodiesel fuel like burns like diesel inside a diesel engine. Unwashed biodiesel can contain as much as 10% glycerin by volume. The biodiesel producer is supposed to "wash" the biodiesel after it's produced, in order to get all that glycerin out. But if they take shortcuts, you'll end up with glycerin left in the fuel, and that's not a good thing.

All microbes need to establish themselves in fuel is the presence of some kind of accumulated water. That's not to say that microbes aren't still present in fuel tanks at all times, but you can consider them to be dormant until there's enough water present for them to get a foothold. We've talked before about problems caused when microbes grow, so we won't repeat ourselves here. Suffice it to say, microbe fuel contamination isn't a problem you really want to deal with.

These can show up in your fuel tank if you fill up from a gas station which is low on fuel. You can tel this by observing if the pump is going slower than lower. If the storage tank is low on fuel, it will dispense fuel at a slower rate. If you observe this, stop fueling, pay out your balance and move to a different pump or station.  Your fuel filter (along with the filters at the station) is supposed to catch any of this dirt and sludge before it reaches your tank. That's true in theory, but in practice, thousands of drivers every year are hit with this problem.