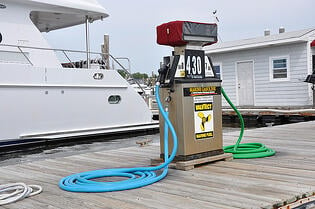 Owning a boat is a labor of love for many of us in that we only get to use them for parts of the year and they're very time consuming to maintain.

Most gasoline sold in the United States is blended with 10 percent ethanol. And while many tout the benefits of ethanol-blended fuels, it's these types of fuel mixtures that can really wreak havoc on your boat's engine.

Here's a look at the top three fuel problems that are facing boat owners:

Ethanol-blended fuel attracts moisture. Once enough moisture has been absorbed, phase separation will occur, causing the fuel and ethanol to part in the fuel tank. The ethanol and water will sink to the bottom, while the fuel mixture remains on top. This destroys the combustion quality of the gasoline by stripping key octane components from the fuel left on top.

To piggyback off of the above problem of water in fuel, the presence of water can also feed microbial growth. That's right - aside from corrosion and rusting inside the engine, mold and other bacteria could be building up, leading to further problems inside the engine.

Yes, just like soda can become flat, fuel can become stale. It's not a new phenomenon, but ethanol can help a fuel become stale much faster than if it were pure. And stale fuel can cause all sorts of problems inside any engine - not just a boat's. What's more is that since boats normally aren't used as often as a car or truck, stale fuel is much more likely to take effect.

The good news is that the aforementioned top three fuel problems that boat owners face can easily be avoided by following a few simple measures. For starters, you can treat the fuel in the boat fuel tanks to mitigate the problems that the ethanol contributes to. Doing so will greatly reduce the chances of water - and microbial growth - from forming within the fuel tank. Fuel treatments will also extend the fuel's life, so it can maintain its peak quality for longer periods of storage time.

Posted in:
Ethanol, Boats and Marine