March 9th, 2014 marked the passing of William Clay Ford, Sr., at the age of 88. He was the last remaining grandchild of Henry Ford; sports fans might know him better as the owner of the NFL's Detroit Lions football team. 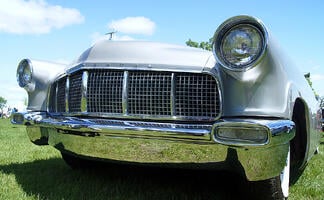 But he had an interesting life and his work with Ford Motor Company over the years served to heavily influence much of the American auto industry.

It was William Clay Ford Sr. who was the driving force behind the design of the Continental Mark II. It was the only car ever produced by the old Continental division of the Ford Motor Company.

As a business division, Continental lasted just 457 days - it was merged with the Lincoln division in 1956 - and produced only one car model, the Mark II. The total production run for the Mark II was less than 4,000 cars.

Some people might consider that a failure. If we look closer at the details, we see that Ford Sr.'s vision produced an American classic that set standards in many areas that the rest of the auto industry scrambled to keep up with.  And that meant better quality cars for everyone.

To start with, we go back to 1948 and the death of Henry Ford. Wiliam Ford Sr. was still in college at Yale, yet was appointed to Ford's Board of Directors. Upon graduating the following year, he began to develop a vision of a superior Ford brand that would compete head-on with the Cadillac and the Chrysler Imperial. The Lincoln Continental was already one of the more celebrated cars of the 1940s, so William Ford used that as the basis for the design and development of his new model, the Continental Mark II. The design team was put together in 1952 and the first model rolled out in 1956.  They aimed to make a car that was big, fast, and looked like nothing else out on the road at that time.

The quality and styling of the Mark II made an immediate impression. Other car models were skewing towards designs with lots of chrome styling; the Mark II went for a more European style that also went away from the "uni-body" style that these other models were going for.

The quality of the Mark II was exceptional for its time and was reflected in so many areas of the model:

The quality specifications for the Mark II's parts were so exacting that Ford routinely returned batches of parts to their manufacturer, not necessarily because they were the wrong size or anything, but just because they didn't "look like" they would maintain their appearance for the long term. Everything had to be the highest quality.

Overseeing all of this was a quality committee that oversaw every single aspect of production and distribution. They pulled cars off the line at random and tested them personally and extensively. Every employee was empowered to find and point out defects so they could be fixed before the car rolled off the line. Word is, one time  a security guard even stopped an entire shipment of Mark IIs from leaving the factory because he found one car with a paint defect.

But the Mark II didn't just set new standards for car quality - Ford Sr. also aimed to make Mark II synonomous with the best customer service in the industry. Any defects on sold cars were fixed quickly.Division service personnel from the corporate office personally went to dealerships to oversee repairs. They also personally called on Mark II customers to make sure their vehicles were operating properly and at the highest level.

All of this attention to detail sounds exactly like what would make an American classic. And that's exactly what the Mark II was called when it was first unveiled.

The first model of the Mark II retailed for $10,000 - equivalent to $87,000 in today's currency.That made it the most expensive American car in history up to that point. It was the same price as a new Rolls Royce and twice as expensive as the latest Cadillac model. Celebrities like Elvis, Sinatra and the richest people in the country owned Mark II's. Warner Brothers gave Elizabeth Taylor a Mark II model custom painted to match her eye color.

Yet, even though it was the most expensive car in the country, Ford actually lost about $1,000 on every model sold. Initially, this was accepted because they gained a greater bump from the overall prestige that the Mark II added to the Ford line. But after Ford Motor Company went public and shareholders started questioning things, the writing was on the wall for the Mark II. It was just too expensive to maintain that level of quality. Incidentally, it was Ford Sr. who was opposed to the public offering in the first place, and there are some interesting stories of the back-and-forth negotiating between "Bill" and his brother Henry II. Henry II wanted to go public because it would raise money (some people thought it was because Henry II lived a lavish lifestyle and needed cash to keep going), and he almost struck a deal that would have left the Ford family owning just 25% of the company. It was Bill Ford who put his foot down and pushed for a 40% ownership, at the threat of scrapping the entire deal. Without Bill Ford's stand, there might not even be a Ford Motor Company in existence today.

If you want to buy a Mark II today, you can still find them. There's still about 1,500 of them left around the country, and sale prices for these classics range from $8,000 for one in poor condition (but still runs) to $70,000 for a beauty in car show condition.

All of these interesting details lead us back to William Clay Ford Sr, and his influence on the industry as expressed by what he did with the Mark II. It was Ford Sr. who laid down the vision of quality and attention to detail that at least carried Ford Motor Company longer than it would have had he not been around. In other words, the impact of the Mark II was residual in the way that it caused Ford to raise the quality of its other models. Of course, that eventually "wore off" and Ford fell into the automotive hard times that it did in later decades. One could argue that part of the reason they did was because the quality of their cars fell so much. If they had key caring about quality as much as Bill Ford Sr. cared about it with the Mark II, Ford Motor Company might still be the top car company in the world today.