One thing not helping hybrid sales is consumer uncertainty about just how much gas mileage they are actually getting. When considering a hybrid, consumers rely primarily on the advertised EPA mileage ratings for the vehicles they're considering. EPA estimated mileage ratings for hybrids like Ford's C-Max and Fusion models are upwards of 47 miles per gallon; an attractive figure for consumers concerned about high gas prices. 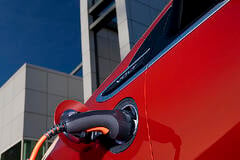 So consumers were understandably troubled when, in December 2012, news came out that a number of hybrid models were consistently failing to achieve those sky high EPA mileage figures. Hyundai and Kia got in trouble for actually fudging their mileage figures to improve sales. And Consumer Reports reported that both of Ford's hybrid models consistently failed to reach their 47 MPG claim; the Fusion hybrid returned just 39 miles per gallon and the C-Max hybrid got just 37. How much does this cost hybrid owners? Driving just 15,000 miles a year and paying $3.50 per gallon for gas, those shortfalls represent an extra $300 a year in gas spending. That might not seem like too much, but anything extra is too much when one is paying thousands extra upfront for better fuel economy.  As one dissatisfied consumer commented on edmunds.com, "I did not pay $33,000 to get 30% less than the EPA rating."

The investigation of Hyundai and Kia actually started early in 2012 but took until November to complete. Once those two companies were busted, they had to issue embarrassing public apologies and corrections for playing fast and loose with their mileage numbers.

So it is not surprising that Ford has been taking proactive measures to try and rectify the mileage gap between what its hybrids actually get in real life and what they claim to get based on the EPA rating.

In July 2013, Ford announced plans to improve the on-road fuel economy and customer satisfaction with their products. What's more, they actually asked hybrid owners to bring their vehicles back to the dealership so that modifications could be made to improve its performance. Said improvements include modifying the vehicle's ability to drive on electric power to enable it to drive in all-electric mode at speeds up to 85 mph instead of the previous 62 MPG. This is definitely a gas saver as a driver driving a hybrid on the highway at 70 mpg would find it burning straight gasoline instead of saving fuel by running on electric. Ford also is modifying the front grill of the vehicles to reduce drag and is making engine warm-up times faster by up to 50% to allow the electric system to operate sooner after the driver begins driving the car. All of these modifications were being introduced both in new models for sale and being applied to the hybrids brought in for modification by their owners.

This move is, no doubt, costing Ford a few bucks as they have promised that all of these modifications will be done for the consumer completely free of charge. But Ford is willing to eat the cost if it means protecting the fragile reputation of its hybrid models and differentiating itself from other hybrid makers. Ford is hoping these changes will help to settle consumer uncertainty over the value of hybrids and, in the end energize stagnant sales of its hybrid cars.