For over fifty years, General Motors dominated the US auto industry with a market share of around 50%. 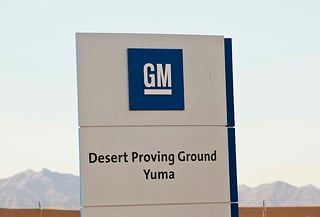 The man who guided the vision that helped GM accomplish this was Alfred Sloan.  It was Sloan who is responsible for many of the auto division names that we recognize today.

And it was GM moving away from Alfred Sloan's vision that ultimately cost them dearly.

Sloan didn't start out in the auto industry. Four years after graduating from MIT, he became President and Owner of a company that made roller bearings. Their first customer was Oldsmobile and a lot of other auto customers joined in doing business with them. This led to Sloan's company joining the other companies who merged together to become the United Motor Company, which then became General Motors.  Sloan became President in 1923 and Chairman of the Board of Generam Motors in 1937, as GM became the largest company in the world.

It was in the 1930s, under Sloan's leadership, that GM really overtook Ford as the dominant leader in the auto industry. And they kept this distinction for 70 years. How did they do it? There are several answers to that. On the one hand, you had Ford Motor Company, the longtime leader in the industry. Luckily for GM, Ford was notoriously resistant to change (you can get the Model T in any color, as long as it's black). This did not serve Ford well in a marketplace where customer tastes were changing.

Alfred Sloan took advantage of this by establishing a unique vision for GM; a vision that helped it surpass Ford as the industry leader. In 1924, Sloan came up with an idea - create five separate brands and five price ranges for five different types of consumers. Out of this idea came five of the car makes that we know today. You started with Chevrolet, branded and priced for the first-time car buyer. From there, you could upgrade to a Pontiac. Then to an Oldsmobile and a Buick. By now, the car buyer is pretty much a 'GM-for-life' kind of person, which was partly the point - Sloan wanted to keep car buyers in the GM family. And when they were ready to make that final big upgrade in their car-buying lifestyle, Cadillac was waiting for them as the top-of-the-line GM car model.

Sloan's idea was revolutionary and wildly successful. It helped create the idea of "planned obsolescence", where a product is designed with the idea that it will have a limited useful life, forcing the consumer to go back into the buying market after a certain period of time. And GM would be waiting there for them with a newer, cooler car model for them to buy. That's not the say that GM aimed to build cars that fell apart after three years. It was more along the lines of going "out of fashion".  We take that for granted as consumers today, even if we don't go looking for it. And it came out of Sloan's idea to create five successful car lines which recognized that the consumer's tastes and buying abilities inevitably changed over time.  Sloan aimed to create GM customers for life.

Sloan did other things as well. Some good, some bad. Nobody goes through life without making bad decisions, we all know that. GM was criticized for being too cozy with the Nazis in the 1930s and profiting from Germany's rearmament leading into World War II. Not much good you can say about that.

Part of the good/bad combination was Sloan's attention to detail and processes. Sloan was an engineer at heart, and part of GM's strength early on was Sloan creating a series of business policies, structures, and systems that helped General Motors tremendously as it overtook Ford. Every great business has to have structure and sound policies and practices in every area of its operations. Sloan saw to it that GM had those, and had them better than anyone else.

But the strength of those systems also proved to contribute to GM's hard time late in the 20th century. Why? Ironically, because it created, over time, a culture that was resistant to change. Sloan died in the 1960s and his successors probably didn't have quite the vision that he had. They had business policies to rely on, but no strong vision. So GM became what had caused Ford's downfall - the world's largest business that couldn't change with the times.

We also can't leave out the fact that part of GM's downfall came in Sloan's successors losing his vision. Specifically, we look at the five car models - Sloan's "ladder of success".  It was innovative not just because of how it caught consumer's changing tastes, but because the different brands did not compete with each other. GM had brand clarity. Sloan's successors, trying to mix things up to recapture former glory, missed this essential part of the vision. They allowed the brand price points to overlap.  The different GM brands began competing for the same customers. This caused brand clarity to diminish as customers couldn't really see a clear difference between a Pontiac and a Chevy. And so GM lost the dominant market share that Sloan's original vision had allowed them to capture.

As another aside, Sloan's system of policies and procedures has also been criticized as being too impersonal and not caring enough about people - they "left out employees and society". And that's never a good thing. If GM is going to recapture its former glory, it has to realize (or continue to realize) that businesses can't be successful in the 21st century by being held prisoner to "the way it's always been done" that worked in the early 20th century.