All fuel has a limited storage life.  Over time, its quality will degrade and break down because of chemical reactions that happen in the fuel.  These reactions can happen faster if the fuel is exposed, over time, to things like air, water and catalytic metals. 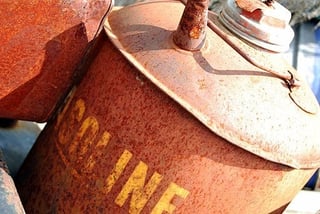 You can’t see these reactions in real time, but you see the end results over time – gas that has darkened and stratified, and probably undergone phase separation (separation of the alcohol from the gas in ethanol fuels).  Diesel fuel has the same problems except for the phase separation.

When it comes to dealing with “old gas”, that’s largely a consumer problem.  Very few businesses store gasoline for sizeable periods of time.  If it’s stored business fuel, it’s most likely going to be diesel fuel.

So that leaves consumers who face the issue.  They often buy small to medium volumes of gas, put it in containers for some present-day or near-future use, and then forget about it.  They find it some time later and it’s now “old gas”.

What To Do With Old Gas

The question is, is there anything that be may done to restore the old gas to useable condition? The answer depends on how far gone it is.

How do you know? The first thing you would look for, if it is ethanol gasoline (which most gasoline is) is whether it has phase-separated.  If you didn’t treat the gas before you put it in storage, then if it is older than a few months, it most likely is undergoing phase separation if the process hasn’t been fully concluded.  You’ll have two layers in the tank – a layer of water plus alcohol on the bottom, and a layer of gasoline on top.

If the gas has phase-separated, then it’s highly unlikely you’ll be able to do anything worthwhile with it.  There are some bogus fuel additives out there which claim to “restore” phase-separated gasoline.  But what they really mean is that they “might” help gas that has barely started the process.  This isn't what most people think of when they decide to try something like that. They're hoping it will magically repair fully-separated gasoline.  For gasoline that is as old as you’re likely to find, there’s nothing cost-effective that will restore it to its previous homogenous condition.

Darkened Old Gasoline: What Can You Do?

For gasoline that has not phase-separated, but which may appear darkened, this means that it has reacted internally to the point where some of its heavier-end components have polymerized and are forming gums and varnishes.  If you were to burn this in an engine, it may well run, but these heavier components won’t fully combust.  They will leave deposits in combustion areas of the engine, like injectors and carburetors.

These kind of deposits can really do a number on the efficiency of the engine.  In most cases, it wouldn’t be recommended to burn that fuel. Unless…..you add a fuel additive that contains a high level of detergency.  Such an additive would function to help remove these deposits as they were being formed, giving your engine its best chance of staying problem free.

Stick To PIB or PEA Detergents

So for old gas, if you’re in a position where you really have to use it, remember to use a high detergent fuel additive.  The reputable types of these additive will specifically tell you that they contain injector or other kinds of detergents.  In other words, they won’t rely on some generalized claim about “cleaning” that they typically ascribe to being a secondary benefit of some weird sounding “new technology”.  Like you might have some no-name fuel additive that claims it “uses nanotechnology to clean the engine” – c’mon man, seriously?

There are plenty of excellent and effective detergent packages out there.  There are PIB detergents (polyisobutylene) as well as PEA polyether amine detergents that are formulated to be compatible with gasoline that contains more than 20% ethanol.  Using a fuel additive that contains a higher level of one of those detergent chemistries will give you your best chance of being able to successfully use old gas.  Provided it hasn’t undergone phase separation, of course.