Do You Know Elon Musk? If Not, You Should.

Elon Musk is the CEO of two of today's best innovative companies - Tesla and Space X. As 60 MInutes said in their story on March 30th, 2014, only four entities have successfully launched a capsule into space orbit and then also returned it safely back to Earth: the United States, the Soviet Union, China, and Space X. 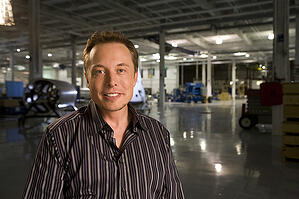 But this blog isn't going to talk just about launching rockets into space. Elon Musk's story is a great American success story. Except he's South African, not American - but he did emigrate to the United States before going to college. We'll get to that.

Some Kids Are Different

What were you doing when you were 12? When Elon Musk was 12 and living in South Africa, he taught himself computer programming and created a computer game that he sold to a video game company for $500. During his teen years, he formed a plan – he was going to move to the United States and become a technology innovator. And so he did, getting two degrees from University of Pennsylvania (economics and physics). Then he got to work, forming a company that created “an Internet city guide for the newspaper publishing industry”. If that sounds kind of boring, what we’re really saying is – Elon Musk’s company wrote some of the first GPS software that could create and map routes between two points. This was in the late-1990s.  How many people do you know who use GPS technology on their phones and Garmins today?  They can thank Elon Musk.

Moving forward, Musk sold the company to someone else, netting $22 million. He used the money to found a new company that focused on online financial and email payment systems. If that also sounds boring, it was this company out which of which sprang what we know as Paypal (in the interests of full disclosure – Musk didn’t write or invent Paypal, but it was developed into what we know today after Musk’s company merged with another one that had the fledgling idea). Just two years later (2002), Paypal is being sold to Ebay for $1.5 billion. $165 million go to Musk.

At this point, what would you do with $165 million?  Money is fine to have but doesn’t give you purpose. It does enable you to fulfill purpose, though. And for a guy like Musk who’s an innovator at heart, he wasn’t going to sit on that money. So he used it to start and get into two more companies – Space X and Tesla.

Going Where No Company Has Gone Before

Space X’s purpose was simple – fill in the hole created when NASA shut down the Space Shuttle program. More long term, Musk founded Space X because he views space exploration as the next way to expand human consciousness and enable us to go beyond our own planet into the vastness of the universe. The early days for Space X were really rough – rockets failed continuously, and it’s really expensive to have a failed rocket. Space X almostwent under, and that would have meant the loss of Musk’s entire fortune. But on the 8th (or was it 9th?) try, Space X launched successfully, and now they are the only commercial entity in history not just to send a rocket into orbit and get it back, but to deliver cargo to the International Space Station.  Which means Musk’s company is playing a key role in future space exploration.

Shattering the Mold On Electric Cars

All of this leads us to Musk’s other company, Tesla.  Musk didn’t start Tesla, but took over as CEO and Product Architect in 2008 as the company foundered during the financial crisis.  Musk’s vision is to have affordable electric cars with free charging stations across the country that run on solar power. People used to think electric cars had to be rinky-dink little boxes that gave up style and performance in order to be green. Tesla shatters that stereotype with cars like the Model S – the highest rated car Consumer Reports has ever rated.   Tesla also was the first electric car maker to move away from powering their vehicles with big bulky batteries. Instead, they use thousands of lithium-ion cells like the kind that power your laptop. They string them together and put them all across the bottom of the car.

Musk has stated that his goal is to make an electric car for “everyone” that costs less than $30,000 but blows all previous expectations out of the water.  This would make Tesla an even more revolutionary company than they are already.  Tesla already leads the industry by selling their all-electric powertrain technology and parts to other car makers so that those companies can develop all-electric vehicles at affordable prices without having to pay huge development costs to make those parts themselves. But in order to get to the point where Tesla cars cost less than $30,000, Musk knows that they’re going to have to solve the battery problem.  Without a revolutionary breakthrough in battery technology, there’s no way to make a car like a Tesla that goes almost 300 miles per charge. So that’s what they’re focusing their energy on currently. If they can crack the battery problem, Tesla might just eventually rank alongside Ford and GM as giants of the world automotive industry.

Except Tesla will have the legacy of making the cars everyone drives that don’t burn any gasoline.