No single factor has changed the gasoline industry so much in the past couple years as the mandated inclusion of ethanol blended in gasoline.  Like MTBE in the 1990s, ethanol is a favorite of the EPA because it causes gasoline emissions to go down, saving the air quality in urban areas already failing federal air quality standards on a regular basis.  It’s previous favorite - MTBE - was removed from the gasoline supply in the late 90s due to concerns about ground water contamination, and ethanol was in a convenient position to take its place. 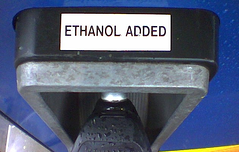 To be sure, ethanol has some distinctly positive things going for it.  It’s non-toxic and mixes well with gasoline, is made from renewable resources produced at home, and more importantly for the EPA, makes a fuel blend that reduces emissions.  Whenever you hear the term ‘oxygenate’, that’s what they’re really talking about – things you can mix into gasoline to increase the amount of oxygen in the fuel and lower the harmful emissions from vehicles that use it.

So if ethanol’s so great, why do so many people complain about it, to the point that some will go out of their way to find gas stations that advertise ethanol-free gasoline? Adding ethanol to gasoline essentially replaces some of the carbon in the gas with oxygen. This lowers the overall energy value of the blend which….you got it, reduces the mileage you can get.  How much will it reduce it? Some people claim 25-35%, which seems kind of high. A more likely reduction is in the 5-10% range. Still, with so many people pinching pennies these days, any kind of reduction like this isn’t going to be greeted very kindly in their eyes.

Ethanol also causes big problems in boats by dissolving rubber and plastic components (including fiberglass fuel tanks) and attracting water in to the fuel.  That’s never a good thing if you’re running a boat. Too much water in the fuel will cause the ethanol to separate out from the gasoline, dragging much of the octane value with it.  It then sinks to the bottom of the tank and gives the potential for equipment damage like warped valves.

So there you have it – the story behind ethanol, the good the bad and the ugly.