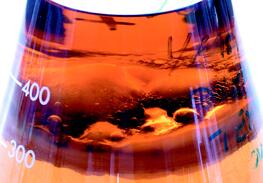 If you deal with or handle stored fuels, you're familiar with problems that microbes cause when they get established in stored fuel systems and start to multiply. So we figured to talk a little more about the nuances of why things happen the way they do, with a little question-answer format.

Only in the sense that they're both "microbes". Bacteria are, well, bacteria, but algae are technically plants.  And plants need light in order to growth.  Since fuel storage tanks don't get much light, there's really no "algae" that grows in fuel.

How long do you have before you can expect bacteria to grow in stored fuel?

There's no one best answer to this because it depends on some factors.  Was there already bacterial presence in the tank system? What's the outside temperature and humidity? Higher humidity and hotter weather will speed up the process. If bacteria are already present, even if they are dormant, that's going to speed up the process even more. So there's no one answer. But we can tell you that tests from the University of Idaho showed an almost 30% drop in fuel stability in stored fuel after just 28 days. And that was without microbial growth, which woudl undoubtedly accelerate the process.

If I'm not concerned about the fuel itself, couldn't I just write the fuel off? What should I really be worried about?

We don't know anyone who likes throwing out the money that's tied up in the investment of hundreds and thousands of gallons of fuel gone bad. But beyond losing the fuel, you've also got corrosion issues to deal with. Microbes produce acids that go beyond just breaking down fuel and start attacking and damaging metal surfaces in the fuel storage system.  If you think you've got money tied up in fuel, imagine how much you got tied up in the capital hardware used to store and distribute that fuel.

So if you've got a diesel microbial contamination problem, it's best to come to grips with the reality that it's going to cost something to make it right. You can pay a reasonable amount upfront to remedy the contaminaton with a biocide. Or you can leave it till the last minute and pay a lot more to fix the damage in the end.