Ever since the EPA mandated the introduction of ultra-low sulfur diesel (ULSD), fueling stations and stored fuel users have been consistently reporting new cases of corrosion in their storage tanks. According to the results of the latest surveys, ethanol contamination in diesel fuel may be to blame. 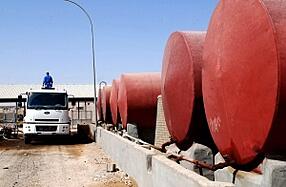 On June 1, 2006, the sulfur content of ULSD was reduced from 500 parts-per-million (ppm) in low sulfur diesel (LSD) to 15 ppm in ULSD. One consequence of the reduced sulfur content was the creation of a more favorable environment for microbes and bacteria to develop and thrive.  This problem is in addition to other known trade-offs to ULSD like increased costs (a few cents more per gallon), 1- to 2-percent less energy, and decreased lubricity requiring the use of additives (or the addition of biodiesel). In addition, the refining process that removes the sulfur also removes high-energy aromatics, which corresponds to a 1- to 2-percent increase in fuel consumption. However, what surprised many analysts were the reported instances of accelerated corrosion in storage tanks and dispensing equipment in as little as six months.

The Findings of an Independent Study

In response to industry concerns about the unexplained accelerated corrosion, the Petroleum Equipment Institute surveyed the diesel fuel industry to identify the issues with systems storing and dispensing ULSD. Their survey revealed sporadic problems occurring in all regions of the country, regardless of the age of the equipment. As a result, the Clean Diesel Fuel Alliance (CDFA) was formed, which includes the American Petroleum Institute, Ford Motor Co., the National Association of Convenience Stores, the National Association of Truck Stop Operators, Petroleum Equipment Institute, Petroleum Marketers Association of America, Association of American Railroads, and Steel Tank Institute. The CDFA funded an independent research project by Battelle Memorial Institute to investigate corrosion in systems storing and dispensing ULSD.

The study’s conclusions were announced Sept. 5, 2012, in a 146-page report entitled, “Corrosion in Systems Storing and Dispensing Ultra Low Sulfur Diesel (ULSD), Hypotheses Investigation.” The Battelle study sampled six sites nationwide that reported accelerated corrosion in ULSD systems. Samples from the six sites were analyzed for the presence of a variety of contaminants and possible contributors. According to the report, among other contaminants, acetic acid was found at all sites from a variety of samples (fuel, water bottoms, vapor, and corrosion scrapings). In addition, the Battelle report stated that ethanol was unexpectedly identified and measured at five of the six sites, along with acetobacter microorganisms, in the majority of water bottom samples. The Battelle report hypothesized that the acetic acid is likely produced by acetobacter feeding on low levels of ethanol contamination. The report further identified this as the most likely cause of the corrosion. The report states, “The source of the ethanol is unknown; however, diesel fuel is often delivered in the same trucks as ethanol-blended gasoline. Also, some underground storage tanks for storing ULSD, which have been converted from gasoline tanks could have manifolded ventilation systems with gasoline tanks. Thus, it is  possible that there be some cross contamination of ethanol into ULSD.”

However, this hypothesis has drawn criticism from the ethanol industry. It points out that, under normal, everyday storage and handling conditions, ethanol should never come into contact with diesel fuel since ethanol is a gasoline additive. It also said that none of the six sites sampled included manifolded ventilation systems.

These critics also point out that Battelle’s report drew its conclusions from a very small sample set. In addition, the Renewable Fuels Association (representing the ethanol industry) was not included in the investigation and not given an opportunity to provide feedback.

It is too early to draw definitive conclusions on how ULSD tanks are being contaminated with ethanol or why accelerated corrosion occurs in some ULSD tanks while other ULSD tanks remain largely unaffected. Some wonder whether the problem may be associated only with fiberglass reinforced plastic (FRP) tanks, since all the affected sites investigated have FRP tanks.

What’s the Next Step For Diesel Users?

The CDFA is currently deciding whether to move forward with further research. The Battelle report recommends additional research be focused on samples from a larger, more diverse set of underground storage tanks over a period of time. The study would sample and monitor ULSD tank systems with and without accelerated corrosion events and investigate the possible source of ethanol contamination.

There continues to be many unanswered questions. More research by the industry is needed to reach a definitive conclusion. In the meantime, fueling stations and diesel users who are being impacted by this corrosion problem may need to turn to fuel stability additives like Dee-Zol Life and Dee-Zol to negate the performance issues that this problem will inevitably bring.