Water in Diesel Fuel: 7 Must-Knows For Getting Rid of It

Anyone who works with diesel fuel, stored or otherwise, knows that water comes with the territory. Water can cause problems all year round, but when the weather turns colder, you can get new problems and also applifications of other issues.

Here are seven must-knows on diesel+water (plus the symptoms of water in diesel fuel) that can save you headaches: 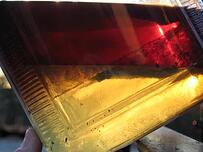 Microbes (bacteria and fungus) in diesel fuel is a nasty problem that turns up too many times. Once they're in there and multiplying, they're hard to get rid of. Water is the essential element that microbes need to establish themselves and multiply, because they live in the water-diesel interface.  A tank that has little water in it is at less risk for developing this problematic situation. And by problematic, we mean that once they're in there, the microbes are producing acids that wreck fuel quality and corrode tanks, they're clogging filters, and they're staying put until you put out extra money to get rid of them through using a biocide.

Biodiesel Blends Are Just As Prone To The Effects Of Water, If Not More So

With many entities switching to 2% or 5% bioblends (in many states, you can put up to 5% bio into diesel and not have to label it as such), they're finding that using biodiesel doesn't make them immune to water issues.  In some ways, you have a greater potential for water-based problems in biodiesel vs. regular ULSD. Since water contributes to instability, you have to recognize that that portion of the blend that is bio-based will have its own stability issues (the bio-portion is more prone to instability caused by water).  Not only that, but microbes love to feed on biodiesel more so than regular diesel.  So it's even more important to keep water under control in tanks that you know have even a small percentage of biodiesel in them.

You Need To Recognize If You Have Water In Your Diesel

Beyond the issues of darkened fuel and microbes, there are performance indicators that can speak clearly to water problems.  When the engine tries to inject water with the fuel, you will experience erratic idling and performance, or the engine may cut out mometarily, especially during acceleration. Any pressure indicators will show a varying of pressure in the common rail system if you have one of those. Not only this, but you'll get either black or white smoke during engine operation.  All of these are reliable symptoms of water in diesel fuel.

Newer Diesel Engines Have More Water Problems Than Older Ones

Many newer diesel engines utilize common rail injector systems.  A poor description of such a system would be that the diesel fuel is cycled through a rail system that fits over top of the pistons, with the injectors hooked into the rail.  A computer controls which injectors fire at what time, for how long, and how much fuel they're injecting.  Common rail injection systems operate at very high pressures. if you get a little bit of water in them, it can cause big problems, not the least of which are blown injectors.

Winter Brings Its Own Set Of Water Problems

Just because we're out of the hot and humid months doesn't mean water problems go away. Water freezes in diesel fuel when the temperature gets colder. This is true more so in small systems (i.e. actual engine fuel systems) than in storage tanks, but that's precisely why the problem is serious - it appears in the place where the fuel is actually being used.  Most diesel users in the North have encountered freeze problems at some point, whether it's frozen water in the fuel line or, more commonly, frozen water in the filter and in the bowl. The only way to keep this from happening is control the water before it gets to freezing temperature.

There are Cost-Effective Options for Controlling Water

The simplest way to control water, if it's in an above ground tank, is to drain the water off.  But many users can't do that, especially if they use underground fuel storage (like gas stations).  They can use water coalescing filters, but those have to be changed.  There are fuel additization options available. Additives to control water tend to fall into emusifying and demulsifying-type options.  An emulsifyer will make water combined with the fuel (Robert Bell invented one of the first of these back in the 1920s). A demulsifier does the opposite - it makes sure that any water that is floating around in the fuel body drops down the bottom and out of the fuel.

Of course Bell Performance has offered water-controlling options, both in its multifunction formulas and single-function problem solvers. Bell formulas tend to skew toward emulsifying the water - combining it with the diesel fuel in tiny particles (micelles) that are suspended in the fuel until it passes through the injectors and into the combustion chamber for disposal.  Dee-Zol and Marine Dee-Zol fall into this category.  Bell also has developed absorbing technologies that absorb water into phase with the fuel so it is seamlessly bound into the water and does not drop out. DFS Plus and Cold Flow Improver utilize this type of technology.

Many times, the best approach for getting and keeping water out of storage tanks involves a combination mechanical-chemical approach.  Busy customers understand the important of water-control but don't have the time or personnel resources to implement the best practices.  This is when it helps to have someone who can utilize the hybrid approach to get water out of the tank, taking it off your hands.

While Bell Performance has developed effective chemical treatments for decades, it is relatively recent that the Bell FTS program has been available. Bell took its industry-leading chemical solutions and combined them with best-practice mechanical water removal and filtration methods.  This created a state-of-the-art fuel PM program that gives stored fuel users a valuable option in their on-going quest to keep their stored fuel healthy and their heaches at a minimum.

Whatever you decide to do this winter, stay on top of your water issues.  You will save money in the long run by doing so.