Which engine oil additive is best?

People know even less about oil additives than they do about fuel additives. Maybe it's because people forget about their oil since they only think about it when it's time to change it every 3 months or so. Oil doesn't have that "top of mind awareness" that fuel does because drivers see how much gas they use every time they fill up.  Some even keep track of the costs every time they fill up, too.  But consider that even if you don't think about it often, the health of the engine oil is more important to the life of the vehicle than fuel ever was. And that means oil additives are essential to the long-life and value of the vehicle.

What kinds of oil additives are there? Are they any good? Let's look at an overview of the situation.

Most oil already comes with additives 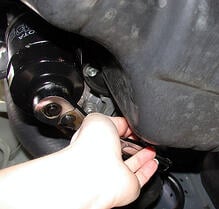 Engine manufacturers have done lots of testing to try and figure out what is needed from a lubricating oil to protect the engines that they design and make. The American Petroleum Institute issues grades for engine oil that are shorthand for a certification that the particular kind of oil contains what is needed to protect a given kind of engine.  These certifications are listed in letter-number format, like CI-4 and CJ-4. Your vehicle's owners manual will list the class designation of oil that is recommended for your vehicle.

It's a little known fact that common engine oils sold on the shelf already contain additives.  These additives turn ordinary base oil into the kind of oil needed to provide the best protection for today's modern engines.  In other words, they help oil fulfill its basic functions in the engines.  What are the oil's most important functions? You would think it's all about reducing friction and wear - and you'd be mostly correct. But that's not the only thing motor oil does, by any means. It protects metal surfaces from particulate wear, keeps acids under control, and even performs the essential function of keeping the engine cool by helping to dissipate heat away from engine surfaces.

To help, detergents, dispersants, anti-acids, friction modifiers and viscosity modifiers are always included in the additive packages that come standard with today's oils. And they all fulfill specific roles in helping the oil provide the best protection possible.

Detergents keep metal surfaces clean by removing sludge contaminants. Dispersants work in conjunction with detergents to give the oil the ability to take particle impurities (like dirt or soot in the engine) and suspend them in the oil film, away from metal surfaces, so they don't cause damage.  Anti-acids are a broad class of additives that neutralize the acids produced in the engine environment. Without them, these acids would cause corrosion and damage in the engine.  Viscosity modifiers are used to help the engine oil maintain the best viscosity across the broadest range of temperatures and conditions that the oil is likely to face. And friction modifiers (like ZDDP) are added to improve the oil formula's ability to cope with high pressure conditions.

So which engine oil additive is best?

Given these facts, what we really want to know is whether we should pay any extra for any of these "aftermarket" oil additives sold off the shelf. To make a good decision, you have to know what you're buying and what it will actually do  vs. what it claims to do or what you're expecting it to do. Let's take a look at the general categories of common oil additives. Note that any product names that we happen to mention are the sole property and copyright of their respective manufacturer(s).

- Lucas makes some very popular treatments that work to improve the lube oil's stability across a range of temperatures and conditions. Generally speaking, these kind of products work fairly well, but the consumer should be cautious about the kinds of claims that are implied by these products. There is a difference between correctly claiming that boosting the antioxidant level in an oil will make it last longer, and making additional claims that doing so will improve gas mileage by, say, 10%. We're not saying Lucas specifically says this, but there are similar products out there that have no qualms about doing just that (what could they be? Well, we know that one of them is a "mystery").

- examples of this can be Dura Lube or Slick 50. These will try to improve or extend the oil's extreme pressure protection capacity, typically by supplementing the "EP" additives already present. Their working mechanism revolves around some version of bonding to or coating of metal surfaces with something that makes them "extra slippery". Dura Lube and similar products use an old technology called chlorinated paraffin.  Slick 50 was famous in the 80s and 90s for claiming to use Teflon ("the world's slipperiest substance") to reduce friction in the engine. We're not here to break down all the claims for these types of additives, but one should be aware that most of these companies have gotten into trouble over unsubstantiated claims of large benefits to the engines they're used in.

Because we (Bell Performance) make an oil additive, we'll have consumers asking us how ours compares to products like Lucas or Prolong or STP oil treatment.  It's hard to do comprehensive testing to verify all the claims made by every product out in the marketplace, though we did do an very interesting extreme pressure protection study with some aftermarket products a few years ago. So you might be thinking that what we're saying is you can't really know what's best. Our advice to consumers trying to decide is to be cautious about product claims, especially claims relating to how an oil additive may boost mileage. Certainly, a healthy oil supply is a lot better for engine performance and life than old worn-out dirty oil. And you could get some mileage boost, but you're never going to buy or use an oil additive just because you want better mileage. You will get the most benefit and bang for your buck if you buy and use oil additives with the expectation that it's going to augment the benefits you're already getting from your base oil, all while making sure that you do the proper oil change schedule for your vehicle.  No oil additive is going to be able to overcome sloppy maintenance practices.

You may be interested in these other posts related to oil additives: