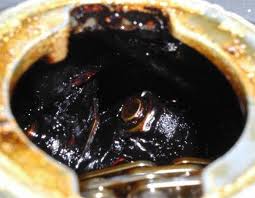 Its time to look at this issue of “engine oil sludge” – what it is and, more importantly, whether you should be concerned about it in your engine.  There's a lot to be said on the issue, but consider this a basic primer on this important automotive issue.Welcome to the first in a series of short articles this month on Healthy Oil. If you’ve ever taken your car or truck to one of those quick-lube oil change establishments, then no doubt at some point they’ve offered some kind of treatment to remove “engine oil sludge”.  How do you know if you need one?

What is “Engine Oil Sludge”?

Engine oil sludge is a combination of oxidized oil and contaminants that have settled and been dispersed onto engine surfaces. 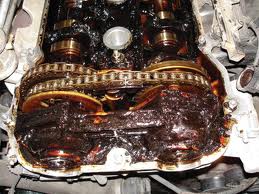 Engines have changed over the years, becoming more efficient and less polluting while lasting longer.  The oils for these engines have changed too – multi-weight oils that can handle higher RPMs and tougher conditions. These oils also have more additives in them to suspend soot particles and maintain oil viscosity, with the end result that people are able to wait longer to change their oil.

Engine oil sludge first started becoming a more noticeable problem about the same time Federal standards for fuel economy changed in the mid-90s.  The engine temperatures became hotter and the oil breaks down faster under these conditions.  Lower-viscosity oils are now that break down faster than heavier oil.  Longer-life antifreeze became more common in use, leading more people to neglect their cooling systems.  Wornout antifreeze not only performs poorly and raises engine temperature, but it also takes on electrical charge that acts like acid on engine parts.

How Does Sludge Form?

Your oil works to suspend contaminants over its life.  At some point the oil will max out its ability to do this and the contaminants will settle out of the oil and on to engine parts, forming sludge.  It’s interesting to note that this happens equally for conventional and synthetic oils – synthetics aren’t really any better at preventing this particular problem.  It’s also notable, too, that these contaminant particles don’t cause engine wear by themselves. They can change the oil color though (note that dark oil by itself doesn’t always mean you’re leaving sludge behind).

Poor oil change habits can also lead to the oil oxidizing in the engine environment. At this point, the oxidized additives and oil components deposit on engine surfaces.  As time goes on, these oxidized and “cook” further and it all turns gelatinous, giving us what we call “sludge”.

Once formed, this sludge travels wherever the oil travels and deposits on those parts. And this is when you start to see problems.

So What? Why Does It Matter?

It matters for a couple of reasons:

First, if the oil is oxidizing and forming sludge, there’s actually less oil available in the system to do what it’s supposed to.

Second, when sludge is formed, it is sticky and gel-like and coats all of the engine parts that it comes in contact with.  This doesn’t sound like a problem, except that this sludge retains heat in the engine.  This puts more mechanical strain on your engine parts, including your radiator and cooling system.  The oil is supposed to function partly as a coolant. Sludgy oil can’t do this, but does the opposite by retaining heat.  A sludgy engine is damaged by every stroke of the engine.  You can lose oil pressure, get terrible mileage, and causes secondary damage to gaskets, timing belt and other parts.

Typically, oil sludge forms first in the top end of the engine, the valve cover area and in the oil pan.  It moves to block the oil screen siphon, leading to severe engine damage because oil isn’t getting to where it needs to be.

Sludgy oil causes excess wear because the oil isn’t lubricating any more. Catastrophic engine failure can follow from this. That’s an expensive pill to swallow.

What Are The Signs You May Have Oil Sludge?

A sharp drop in oil pressure should always be a concern.

How Do I Prevent Oil Sludge Formation?

By changing your oil on a regular basis within the recommended time in your vehicle’s owners manual.  Keep in mind that this doesn’t mean you have to change it every 3000 miles; most automakers recommend 5000 – 7500 miles.  When you regularly neglect these guidelines and exceed 10,000 miles, that’s when you can look for trouble.

To supplement your oil changes, add Bell Engine Flush before you change your oil.  This will remove oil sludge deposits in lubricating areas with your oil change.  Sludge buildup is reduced and your lubricating system stays cleaner, longer.