Top Trends in Diesel Fuel Storage for 2013 - Stabilizers and more

With diesel prices still sky-high compared to years past, it's more important than ever for large-scale diesel users to be on top of the trends in fuel storage and long term fuel storage that could impact their bottom line. Storing ten or twenty thousand gallons (or more) of diesel fuel is a hefty financial investment, and these users have to make sure their investment is protected so it will do what they spent the money on it to do. So here are some of the important trends coming for 2013 that could have an impact on diesel users' bottom lines.  We like to keep on top of these because it's in our line of business to make the diesel fuel stabilizer treatments and the biocides that are used in the industry.  But even if you're not a diesel user yourself, you should still care about this issue because if it costs the business down the street money, you're going to end up paying for it yourself, eventually. 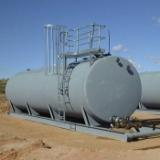 Each year in the middle-third of the year (May-September), the EPA issues its ruling on the volume of certain kinds of biofuels that it's going to require to be made for the following year.  For 2012, the EPA ruled (in 2011) that there would be a target of 1.0 billion gallons of "bio-mass based" diesel fuel to be made and used in the United States.  "Bio-mass based" means biodiesel - made of plant sources instead of animal sources.

In September, the EPA rules that they would look for 1.28 billion gallons of the same kind of fuel to be used in 2013. That's an increase of 28%.

What does this mean for businesses? Looking past whether the production capacity will keep pace with the demand (if it doesn't, prices would go up), biodiesel use is going to mean lower mileage and more shutdown issues in colder climates.  Greater use of additives like diesel fuel stabilizers will be in order. Not good news for bus fleets that have been mandated to use biodiesel.

Not only that, but 28% more biodiesel use is going to mean 28% more problems with the stability of these stored fuels.  Users are going to require diesel fuel storage stabilizers and biocides to keep the fuel fresh and keep out the bacteria and fungus that infect large storage tanks and munching on the bio-based fuel inside.  When you get an infected tank like this, it means extra expense to disinfect and clean the tan with a biocide.  Bell Performance ourselves have seen renewed interest in Bellicide from local entities who are now getting around to dealing with the tank infection issues that biodiesel is bringing to them.  Luckily for them, it's pretty cost-effective to use Bellicide to kill off bacteria and fungus.  The alternatives aren't pretty.

2. New fuel storage rules to hit farmers in May

Back before 2011, the EPA passed some new rules regarding the use of storage tanks. These new rules were to require entities storing fuel to put into place comprehensive plans and measures centered on preventing fuel spills.  Now, this sounds like an excellent idea on the face of it - who's against preventing things like that? But the new rules are a lot more cumbersome than at first glance, and for that reason, politicians successfully petitioned the EPA to extend the compliance window from 2011 to May 2013.  That deadline is now coming up.

What does this mean for businesses? Don't be mistaken in thinking these regulations are only intended to prevent BP and evil oil companies from polluting our back yards.  These regulations place the most burden on small businesses and farms, who not only far outnumber the big boys, they've got fewer extra resources to spend on making sure they don't run afoul of new rules.  So these small businesses and farmers are going to need to make sure they know the rules and they've got their plans in place.  And of course, you as the consumer should care about this because all of this extra expense will get passed on to you.

In case you're wondering about the details, you can find them here.