Does premium gas have ethanol in it? 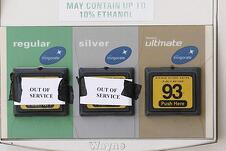 There are certain myths floating around about premium gas and what it will and will not do. Myths like you get better gas mileage on premium gas. Or your car lasts longer if you spring for the expensive gas. Does premium gas have ethanol in it?

There are some people, who swear by premium gas and will put nothing else in their vehicle.  We think of those people in the same grouping as the people who swear by changing their oil every 3000 miles on the dot.

There's nothing technically wrong with either of those things. It's just that they may not be getting all the benefits they think they're getting, not to mention throwing money away unnecessarily.

In one of our previous blogs, we were discussing how ethanol requirements actually vary by state.  The individual states have a certain amount of freedom to write their own rules for how much ethanol is made available and where you can find it. That doesn't mean there are any states which are ethanol free. The differences are mainly in the labeling laws and whether the states will allow ethanol and ethanol-free gas to be sold alongside each other. Some states like Oregon prohibit that completely while other states like Arkansas allow it much more.

There is a difference between states on whether premium gas specifically has ethanol in it or not. Or, more correctly, whether it's required to have it in it.  Two states in the Union, Missouri and Montana, have specific exemption to allow ethanol-free premium gasoline. So if you live in one of those two states, you can be thankful.

For the rest of us, we are faced with the unpleasant reality that the refineries are all but tied into putting ethanol in premium gas. This is because they have to use the ethanol to raise the octane level of their gasoline blend in order to satisfy the higher octane requirements of premium.  This is one reason why you don't get better gas mileage with premium gas, because an essential part of that blend is a component that has less energy and forces the gas mileage down simply by nature.

So don't get fooled into thinking you can escape ethanol's grasp simply by paying more and getting premium gas.

You may be interested in these other posts on Premium Gas and Ethanol: