The Real State of Microbes All Around Us

The rumor is that when the famous philosopher Socrates was on his death bed, he uttered the immortal words (which we’ll paraphrase) the more I know, the more I realize I know nothing.  We may think we know something, but the more we learn about it, the more complex the issue becomes, to the point where the deeper we go in the weeds, the more aware we are that we never really knew that much about the subject to begin with. Better yet, that it was more complicated than we imagined. 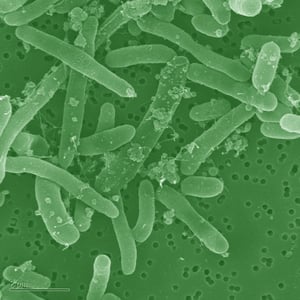 The natural world can have that effect on us. Especially when we’re talking about microbes. Not a topic that holds people’s attention very much. But the field of microbiology can teach us some important things, no matter who you are – including if you’re in charge of stored fuels.

Microbes are all around us. That may not seem like that much of a news flash, but when you dig down into it, there are some significant implications about what we need to do when it comes to stored fuel contamination.

The truth about microbes and the world around us

When we talk about “microbes” or bacteria and fungi and molds and viruses, we’re talking about volumes of these living creatures that dwarf our ability to comprehend them.  Part of the problem is that we can’t see them with the naked eye. We can only detect them when they’re aggregated together in the millions or billions, so we underestimate how many there really are.

There are around 7-something billion people on Planet Earth. That’s a lot of people. But small potatoes compared to the number of microbes out there.

Every square centimeter of any surface, anywhere, probably has a million or more microbes on it. ONE MILLION. Per SQUARE CENTIMETER. Everywhere and on everything.

Lots of species but even more members

Remember, though, we’re talking about species here, not total numbers. How many total microbial organisms live with us on Plant Earth? Consider facts like the average person has 100 trillion microbes just on their body (some scientists like to say that we’re only 10% human but 90% microbial). Then there are all the microbes living in the soil and in the ocean (more than 90% of life on earth lives in the deep ocean, waiting to be discovered). The best estimate of the scientific community is that there are 10 million trillion microbes per person in our environment. And that’s down 92% from prior estimates before 2012.

And don’t even get us started on all the microbes that have been frozen in the ice and permafrost in the Arctic that’s now thawing out.  Countless species of bugs that now threaten to wake up, and to which the human race as we know it has never really been exposed to. Scary stuff – we’ll save that adult scary story for Halloween.

These kind of figures are so vast, the human mind can’t wrap itself around them.  They can start to become meaningless - kind of like trying to talk about the size of the universe with an astronomer. So let’s put some meaningful context to these figures in terms of some useful points we can make.

First, watch out for those Lysol commercials

Think about these microbial facts the next time you see a commercial for Lysol or some other “anti-bacterial” cleaner touting how it’s going to keep you and everyone around you healthy. Because, you know, it kills 99.9% of bacteria in minutes.

That seems like a lot, but take a step back and reconcile that with what we’ve just been talking about.  If you have 10 billion bacteria (I know we’ve been saying microbes, but work with us here) on the palm of your hand and you use a Clorox Wipe, you kill 99.9% of them. Which means you don’t have 10 billion bugs on your hand, you only have 10 million. Ten million microbes left.  Then consider that, depending on the species, they’ll divide and replicate every 30 minutes (or more or less). So it’s very much within reason that you’ll be back to square one with 10 BILLION microbes on your hand in just five hours or so.

Seems like a lost cause, doesn’t it? Not entirely – this isn’t meant to imply that washing your hands or being “hygienic” is just a lost cause. There is value in that.  But the more you learn about the hidden microbial world around us, the better perspective you get on how the world works.

Second, it just goes to show how important it is to watch stored fuel

Once you know the true extent of microbial presence, it puts other things like stored fuel health in a different light.

But just how important?

Even if you’re around to drain out all the free water, you’re not realistically going to get all of it. There can be pockets of water left behind because of the tank design. Or if the tank settled. Or any number of other things.

For the sake of argument, let’s say you drained the tank as best you could,  but you left a one gallon pocket of water behind – about 4000 ml for our metric friends. Bottom water in fuel storage tanks can easily contain 1 billion or more microbes per mL. Not per gallon, per milliliter.  So that little pocket of water you left behind can have 4 trillion (or more) microbes still hanging around the tank.

Then consider that they’ll keep multiple and dividing (at different rates depending on the species) such that you can have 10,000 times the microbes you started with in just 5 hours. What about 5 hours after that? 5 days after that? You know the answer.

The old days of set-it-and-forget-it with stored fuel are long gone.  The more you learn about the real state of the world around us and all the microbes we share the planet with, the more crystal clear that realization should become.  The best practice for keeping stored fuel healthy are shifting away from preventive maintenance to predictive maintenance.