In the years we’ve written about diesel fuel maintenance, typical topics would include microbial contamination control and prevention and diesel fuel stability. But not so much talk about the small particles of debris that form in stored diesel fuel. Diesel fuel particulates can cause wear in high pressure common rail injectors, provide food for fuel microbes, and combine with heavy-end components of the fuel that drop out of solution and grow in size to plug filters and cause engine performance problems. 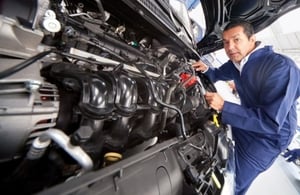 Today’s diesel fuel engines, now almost universally of common rail design, are remarkably intolerant of particulate contamination in diesel fuel.  So one of the goals of diesel fuel maintenance should be to minimize the formation of these bad actors.

Today’s diesel engines are remarkable feats of engineering, yet much more sensitive to the ill-effects of particulate contamination. A common rail diesel injector might have only two microns of clearance, which is the thickness of a bacterial cell. It has to be this way for the injectors to generate the 30,000 psi needed for the system to operate. By comparison, injectors from just the 2000s were only running 7,000 – 10,000 psi. And the pressures will only get higher in the future, with analysts predicting them to go as high as 60,000 psi.

What About Engine Filtration

Diesel engines have to have on-board filtration to take out these particulates. And these systems have evolved as the needs of the engines have become more strict. The primary filters will take out 8-10 micron particles and the final filters go down to 2-5 microns. Keep in mind that filter ratings like these can be a little deceiving because, well, we’re not sure exactly what they mean when they say ’10 micron rating’. Does it mean it filters out 100% of particles bigger than 10 microns? Not usually.

So the onboard filtration system is going to try and catch as many particles of those sizes as possible, for the health of the engines. But it’s likely that it won’t catch all of them. If the engines and injectors are extra sensitive to smaller and smaller particles than ever before, it’s imperative to manage your fuel to minimize their formation.

To better meet these needs, industry groups have been pushing for a change in the ISO contamination filtration standards for fuel. These standards were created by the International Organization for Standardization to define the limits for various particle sizes to be found in liquids like fuel and lubricating oil.  The ISO “code” is expressed in three numbers, i.e. 19/16/14.  The first number defines the amount of particles of 4 microns or larger. The second number is particles 6 microns or larger, and the third number is particles 14 microns or larger. All of these are per milliliter of liquid. Remembering that today’s common rail engines can be sensitive to particles as small as 2 microns, the importance of limiting particles of larger size in diesel fuel becomes more apparent.

The ISO rating numbers correspond to defined ranges (number of particles) that go up as the number goes up.   If the fuel meets the current ISO level along with containing less than 200ppm of dissolved water, the fuel can be recognized as ‘clean’.

Industry analysts warn that, because of high pressure common rail system technology, the ISO rating may end up moving to a 12/9/6. This would mean 4 microns particles would go down from, say, 2000 per mL to just 20-40. And you’d find less than one 14-micron particle for every mL of fuel, instead of finding 40-80 of them as things currently stand.

How To Meet The rising Standards

It’s virtually impossible to meet these kind of strict standards in fuel by doing the same things we’ve always done. Chemical fuel stabilizers can assist in keeping fuel particulates from forming (especially if their stabilization package contains a dispersant). And it’s important to use biocides to keep microbial activity at bay (which can spike particulate levels in fuels). Fuel filtration may also be necessary.

Getting into the details of all of these may require more space than intended here. The important point is that proper diesel fuel maintenance, in order not to run afoul of the ever-changing standards, needs a multi-pronged approach that requires more attention to the fuel than in times past. The days of setting-and-forgetting your stored fuel are pretty much over.