Over time, all stored fuels will develop microbes in them. We mistakenly oversimplify microbial problems, underestimating the vast richness and variety that characterizes the microbial world. These mistakes can lead us to some faulty expectations when it comes to microbial testing of our fuel.

One of the ways we oversimplify things with microbes is we forget that microbes are living organisms that don't all grow equally well in all conditions.  There are a lot more kinds of microbes than we think. Microbiologists who study these kind of things have done genetic analysis to speculate that there may be 1 trillion SPECIES of microbes living on earth. To this point, we've only identified around 10 million species. There are lot more out there than we realize. 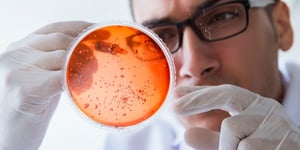 In some respects, microbes are like people. Different microbes like to be around different things. And different kinds of microbes work together in relationships to form and sustain colonies. They don't just grow side-by-side in random fashion. They actually work together, which means if one kind of microbe isn't there, another kind of microbe may not even be able to grow and contribute to that colony. They both need each other.

One example and then we'll tie this together. Looking at major classes of microbes, there are ones that can grow in light vs. ones that die when exposed to light. There are ones that thrive in the presence of oxygen (aerobic) vs. ones that won't grow in the presence of oxygen or may even die if exposed to it (anoxic or anaerobic). Think about a fuel storage tank where you have a layer of water below a layer of fuel. On the sides of the tank, near that fuel-water interface, is a layer of biomass slime housing thousands of different species of microbes, all living and working together.  Some species will consume any oxygen in the environment around them, which allows other species that can't tolerate oxygen to grow and thrive. So they work together.

How does all of this relate to microbial testing?

The fact that some microbes like or dislike different environments starts to matter when we do fuel sampling in advance of microbial testing. When we pull a fuel sample from the bottom of a tank, we're taking billions of microbes and pulling them out of the cozy circumstances where they've lived their whole lives. They've grown up in dark places where there was little oxygen and the temperature was controlled. Now, they get pulled into the light, where the temperature is different, and they may be exposed to the air for the first time ever.

In these situations, some of those microbes won't make it. They'll die off. Still others will decide they like their new environment better, and will start to grow at faster rates than they did before.

If you're using a culture test that takes days for microbes to replicate themselves and show results, these things matter. The longer you have to wait for results, the higher the chances are that the microbes that do show up in your results won't be reflective of all the microbes in your tank.  The microbes you see will vary from the actual microbes.  The microbes that hate their new conditions, more of them will die off over time -not showing up in your results. The ones that like being where they are at, they will multiply and show up to a greater extent in your results. This is one of the unavoidable characteristics of in-field microbial culture tests.

And then, consider these nuances. Not only do we have the consideration of some dying vs. some surviving. What if some of the ones that survived were microbial strains that had a shorter replication time? What if many of the others that died off because of their change of home were microbial strains that take longer to reproduce? Now what you will get are even greater numbers of total microbes, because you've eliminated the slower growing microbes in favor of the faster growing ones that will be the ones showing up in your results.

ATP testing methods, like ATP-By-Filtration, are less sensitive to these vagaries because they don't give results in days. ATP tests give you a more up-to-the-minute picture of the total microbes in your tank, bypassing the kind of unavoidable population changes that plague culture tests like microbial dip slides and gel culture bottles.

Fuel Contamination can be Avoided with Clean Fuel and Sound Practices
Diesel Fuel Storage & Sulfur: The Rules Have Changed. Are You Ready?
The Importance of Protecting Hospital Stored Fuel for Emergency Use
Being Selective is important (for testing microbes)