Grease Compatibility: Something To Pay Attention To

Often overlooked, grease compatibility is a key consideration when selecting a lubricating grease for an application.  This is especially important in business and industrial situations where lubricant failure can have a particularly grievous price tag.

The issue of grease compatibility comes into play when grease is being selecting for use that may be different than the grease that was previously used.  In these situations, the best practice is to clean out as much of the old grease as possible.  This can often be done by dispensing the new grease into the space, where it will displace the old product.

What’s the point of doing this? It may be more important than you think because of the issue of grease compatibility. If the two greases are incompatible, you run a much higher risk of grease lubricant failure.  This begs the question – what makes greases compatible vs. incompatible? Which ones work well together and which ones don’t?

To understand the issue, you first have to understand what grease actually is. At its heart, grease is a heavy base oil – the lubricant – which is combined with some kind of soap thickener. The soap thickener traps the lubricant oil and makes it thick and “stringy” enough that it stays in place when it’s put into an area where there are moving parts that need lubrication.  When the term “soap” is used in this context, it’s not talking about the kind of soap you wash your hands with, but rather a class of compounds that result from a chemical reaction between an acid and a base.  In the case of making grease, they will take a fatty acid that contains some kind of metal base and react it with a base like sodium hydroxide. This gives them the kind of soap thickener they need to manufacture grease from.

If you want a general rule of thumbs, greases are considered to be compatible if certain specifications of both greases are similar.  Recall that grease performance can be gauged by examining their specifications to give an indication of their performance in key areas.  Some specifications like copper strip corrosion (whether the grease will contribute to corrosion of metal surfaces) or oxidative stability (how well the grease stays together and resists reaction with prolonged exposure to air) are important but don’t affect their compatibility with other greases. But there are three specifications that may be examined that will give important indications of whether two greases are compatible.

So the rule of thumb here is that greases are considered to be compatible if the following things are true:

In other words, if you examine the Worked Penetration, the NLGI Grade under elevated temperature storage, and the dropping points, if the two greases to be mixed have specifications that are close to each other, they’re more likely to be compatible.

In situations where it is absolutely critical to make sure these are right, a customer will contact the grease manufacturer and arrange for bench testing of the specific greases in question, to confirm these points.

Consequences of Mixing The Wrong Greases

Mixing incompatible greases can have dire consequences.  They may react together and cause a separation of the base oil or oils from the thickeners of the two greases.  When this happens, the base oil can no longer stay in place and you get a messy situation – oil oozing or running out of the area where it was applied.  You can probably guess the potential consequences that might follow from this happening.

Today, it’s more complex than that because there are so many more options to make high performance advanced greases.  Below is a compatibility chart that will give you a good idea of which kinds of greases play well with each other and which do not. 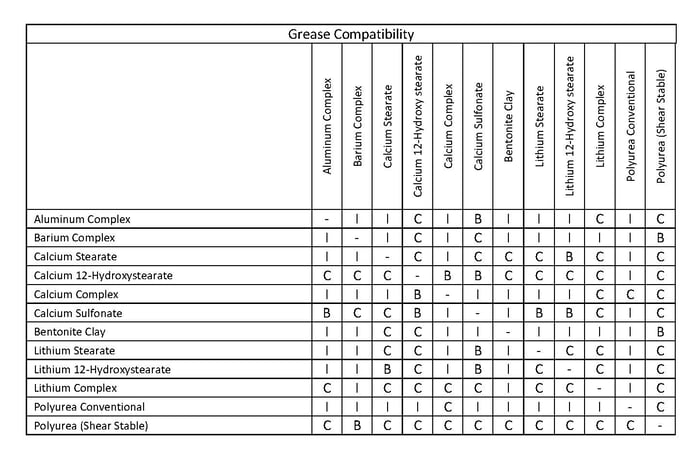 B = Borderline
C = Compatible
I = Incompatible

Check out these other posts on Lubrication:

Lithium Complex vs. Calcium Sulfonate Grease – The Workhorses of the Industry
Oil Additives For Diesel Engines- Are They Worth It?
Lubrication of Turbochargers
Slipping & Sliding: Diesel Fuel Lubricity Issues