Figuring out that you have algae in your fuel is one thing. But getting rid of it and keeping it away is a whole another ball game. A game you've got to win if you don't want a perpetual headache. 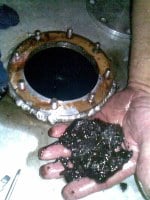 Treating for diesel fuel algae is pretty simple, provided you have the right solution. But by simple, what we really mean is "follow these few recommendations and you'll have an excellent chance of putting the problem behind you."

Get Rid Of The Water

This is step number one for any effort to get rid of algae in the fuel. Fuel microbes need water to survive and thrive. If you have more than, say, half an inch of water (you should be measuring it with a tank stick and some water paste), mechanically drain the water out. Then follow up behind with some kind of water-absorbing chemical treatment to clean up the rest. If you don't get rid of the water, everything else won't work as well as you'd like.

Apply A Biocide, Not Just A Generic "Water Treatment"

I know we just advised to clean up the rest of the water with chemical treatment. That recommendation still applies. But that treatment isn't intended to kill off the microbes, but rather, to fix the environment to make it harder for them to grow in the water. No, you need to use a dedicated biocide to kill the active microbial contamination in the tank. Fuel biocides are heavily regulated and controlled because they kill active living organisms in whatever liquid they are being used in. That's a good thing here. You want something that's going to kill the fungus, mold, bacteria and algae. Simply scavenging the water out won't do that.

This is really important. It's not enough to just pour biocide in on top of existing fuel and leave it, hoping the biocide is going to diffuse down and do what it's supposed to do. Industrial bulk fuel users will inject the biocide into the fuel line. Why? Because that's what ensures the biocide gets mixed in most effectively. A biocide cannot work if it does not come into physical contact with what it's supposed to be killing. So if you want the biocide to do the job, you need to make sure it's well mixed into the fuel. If you have the equipment to inject it into the fuel line, that's great. For many customers, they'll add the biocide and then circulate the fuel for a period of time. That works pretty well, too. Those are the big four important recommendations.

There are other tips, like giving the dead microbes time to settle out after you've killed them. And make sure you have extra fuel filters on hand to filter out dead microbes. If you follow these simple recommendations, you'll have a much better chance of fixing the problem the first time.

Check out these other posts on diesel fuel algae: