How to Thaw Frozen Gas Lines in a Car 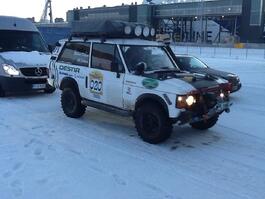 The cold temperatures are here and bring with them certain hassles like frozen fuel lines. A frozen fuel line will stop an engine dead in its tracks, preventing it from getting the essential fuel it needs to fire up.

Frozen fuel lines are distantly related to the concept of vapor lock, as both involve air or vapor in the fuel line. In vapor lock, liquid fuel contained in the fuel line will turn to vapor when the engine is stopped and still hot. This prevents the carburetor or fuel injectors from being able to get the fuel they need to fire, and the engine shuts down.

A frozen fuel line happens when water vapor contained in the fuel line freezes due to cold temperatures. This prevents fuel from getting to the combustion chamber and the result is the same - an engine unable to run.

Sometimes people confuse these two problems because the end result looks the same to them. It's cold outside and their vehicle won't start. Gelled fuel is something diesel users have to contend with in the wintertime, but it rarely involves water in the fuel lines. Instead, it involves the natural paraffin wax content of the fuel thickening and gelling to the point that the fuel blocks the fuel filter (which becomes clogged with wax itself).

Conventional Wisdom - Warm The Car Up

Googling the question of "how to thaw frozen gas lines" will give you multiple references that advise putting the car in a warm place and waiting. If this happens to you at home, they advise placing a portable heater under the car and under the hood to warm the gas lines. The frozen water will thaw out and you'll be good to go.  Same thing for moving the car to a warmer place. This is good advice if you have access to a tow truck or this happens to you at home, but what if this happens when you're out and about? You'll need some different preventive measures to solve the problem.

How To Thaw Frozen Gas Lines

Here are a couple of ideas to fix or prevent the cold weather problem of frozen fuel lines when you're out "in the field".

1. Keep your battery charged - When the fuel line freezes, the tendency is to start the engine multiple times in an effort to get it started.  Without a full battery charge, it's not likely that the engine will be able to turn over long enough to fight through the frozen mixture blocking the line.

2. Keep the fuel tank as full as possible - Having a full fuel tank reduces the space available for water vapor to collect, thus reducing the possibility of freezing.  This is more important to do if you've still got one of those old carbureted vehicles.

3. Use ethanol fuel (!) - Perish the thought - a recommendation to actually use ethanol fuel? We should all be well familiar with the downsides of ethanol-blended gasoline. But one of its positives is that it helps prevent fuel line freeze because of its ability to absorb water.

4. Add fresh gasoline - Adding fresh fuel to a frozen situation works best when the tank is near empty. The addition of new fuel will help what's left in the tank to overcome the frozen effects.

5. Keep a Thawing Additive on hand to use when you need it - There are fuel treatments available that will thaw frozen fuel (as well as gelled diesel fuel). They can act in the same way that ethanol does, by absorbing water. You should keep a bottle of thawing additive on hand so it's available when you need it.  Once they have a frozen gas line, drivers can't usually wait to run out to the store to buy something to fix the problem.  Bell Performance offers a selection of effective cold weather treatments, including Quick Thaw treatment for diesel and gasoline.  HEET is another additive recommended. Whichever you choose, you need to buy it before you have a cold weather problem.

6. To prevent gelled diesel fuel, use an anti-gel - Since gelled fuel is caused by a different mechanism, you need something different to prevent it from happening. IF you happen to have a gelled fuel problem right now (as in, your vehicle won't start), use the same kind of thawing additive referenced in #5 above.  But it's always better to prevent problems, and cold weather diesel users know that cold flow improver or some kind of anti-gel fuel treatment is an essential winter tool. You add it to the diesel fuel when the outside temperature is above the fuel's cloud point. If you don't know what that is, think 32 degrees as a safe baseline. Once the fuel is treated with antigel, the chemical will keep the fuel's natural wax content from sticking together and falling out of the fuel.

Check out these other posts you may find helpful: