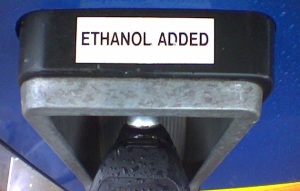 On Thursday, December 5th, the EPA met with Congress, stakeholders and industry leaders for testimony on proposals to reduce the amount of ethanol in our nation’s fuel supply. This is a gigantic proposed turnaround from a trend which has seen the total amount of ethanol added to gasoline grow by leaps and bounds in the last ten years. The driver behind the steady rise of ethanol across the nation is the law passed by Congress known as the Renewable Fuels Standard, or RFS. The RFS dictates a given total amount of “renewable fuels” (i.e. ethanol and biodiesel) should be used by the country during a particular year. Up to now, Congress has increased this required amount for years into the future. Right now, the required amount is 13 billion gallons. By 2022 – less than ten years from now, this required amount would be 36 billion gallons. So imagine what a change it would be, and imagine the impact, if Congress decided to reduce the amount and not increase it.

Rather than bore you with all of the details, we pulled out the highlights of what you need to know on this proposed change.

The RFS and the “Blend Wall”

This term “blend wall” is one of those industry terms that makes the eyes of the average person glass over. But it was part of the discussion on December 5th.  When fuel suppliers and ethanol producers talk about the “blend wall”, they’re referring to the maximum total amount of ethanol that can be put into gasoline. Not in the sense that “you can’t put more than 10%”, but in the sense of the total amount (as in billions of gallons) of ethanol you can put into fuel across the gasoline if you have to obey certain parameters like how much total gasoline is available to blend ethanol into, and what’s the most ethanol per gallon you’re allowed to add.

Under the current conditions with 10% ethanol being the max in most parts of the country, that blend wall is at 13 billion gallons. At the Congressional hearings, industry leaders were telling Congress that “we’re already at the most we can handle. We don’t have any more room in the nation’s fuel supply to add more ethanol that you’re telling us we have to add”.  In others, they were trying to tell Congress “we’re at the blend wall.”

Leaders within the fuels industry also spoke out against the coming gigantic ethanol increases from the RFS by referencing the fact that gas prices will likely go up if the percent ethanol in gas goes up to 15% (because of the coming total increase mandated by the RFS) and refineries can’t keep up with the production. And leaders in other related industries have spoken out that the RFS’ mandated increases are unrealistic, bad for engines and bad for the country.

And not only could gas prices go up because of this, there’s also the whole RIN subindustry. RINs (Renewable Identification Numbers) are waivers that oil companies can pay for if they can’t or won’t blend the required amount of ethanol. So if the ethanol requirement triples, it’s easy to forsee many more oil companies biting the bullet and saying “we’ll just avoid the hassle, pay for the RINs, and pass the cost on to the consumer.”

You saw that right – another way that you, the consumer, ultimately pay for the cost of ethanol and the RFS.

Why did they think increasing ethanol was a good idea?

Nothing happens in a vacuum, and if Congress passed a law projecting that it was a good idea to have 30+ billion gallons of ethanol in our gasoline within ten years, there’s got to be a reason why it happened. And it goes beyond the simple idea that Congress is just “in the pocket of corn lobby”. And this is where it’s useful to look at recent history.

The RFS was passed into law by Congress in 2007. Back then, a few things were different. We were in the middle of two expensive wars. And we were in the middle of a trend that had seen fuel consumption rise every single year since, well, pretty much ever. So when the RFS was passed, it was under the assumption that American drivers were going to keep buying bigger cars and driving them more.

But big changes have seen that assumption proven to be misguided. Since 2007, Americans use less gas than projected, while significant advances in vehicle technology have contributed to a relative drop in gasoline consumption.

And that’s what is causing the tremendous pressure between the fuel supply and the gigantic amounts of ethanol now projected to be added.

Who’s fault is It? The EPA or Congress?

At this point, it’s easy to scapegoat the EPA. But when it’s all said and done, when it comes to the RFS, Congress is actually to blame, not the EPA. The EPA is mandated by law to do what Congress tells them. And if Congress lays down the law that we have to almost triple our ethanol in gasoline over the next ten years, there’s nothing the EPA can do but figure out how they’re going to comply (and force everyone else to comply along with them).