Batteries are one of the more overlooked parts on any car, whether it’s a classic car or a newer one. People don’t notice it until they don’t work.

Having discussed in a previous blog post some general guidelines on selecting the best battery for your classic car, we wanted to continue the discussion by looking at some additional, battery-related tips.

When working on your classic car’s electrical system (including the battery), a few safety precautions should be observed. 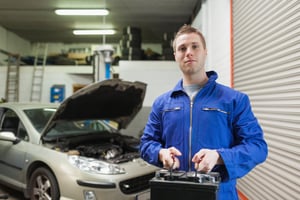 Remember when we mentioned that sporadic use of classic cars through periodic driving can shorten its battery life, let’s talk about battery charging.

When performing tests on a battery it is important that the battery be fully charged. A battery that has a low charge will test badly even if it is a good battery. Remember - you must put back the energy that is used immediately. If you don’t, the battery sulfates and that affects its performance and longevity.

Do not use a high output battery charger when charging your battery. A slow trickle charge is desirable and will not over heat the battery and generate a lot of hydrogen gas. After charging the battery, and before testing begins, you must remove the surface charge by turning on the headlights for a few minutes.

There are two types of tests that can be performed on a battery.  The first is one with a hydrometer to measure the amount of sulfuric acid in a cell, which is an indicator of the level of charge. The second is a test with a load tester.

Hydrometer tests are very accurate but can only be done on a serviceable wet cell battery. Use a temperature-compensating hydrometer and you should not see more than a .05 volt difference between cells. A fully charged 6- or 12-volt battery should have a cell reading around 1.265 and a discharged cell will be around 1.120.

Batteries with an internal hydrometer that have a green or black indicator in sight glass will only tell the condition of one cell. That cell can be good and any of the others could be bad. If you are checking the total voltage on a fully charged battery, a 6-volt battery should read slightly over 6 volts and the 12-volt battery also slightly higher than 12 volts. A reading below these voltages usually indicates a bad cell.

Load testing is the second way to test batteries and is the only way to test a maintenance free battery. It should be pointed out that the cheap load testers found at your local automotive supply store will not put enough load on the battery to determine its condition. Carbon pile load testers that cost around $1,500 or more are what is needed to do this test and they are usually found in an auto repair facility.

Load testing for a battery is done by connecting positive and negative leads to the battery and dialing up a load based on the cold cranking amps or the ampere hour rating of the battery. These two ratings are usually listed on the top or the side of the battery. The battery must be fully charged in order to do this test. A load of one half the cold cranking amps or three times the ampere hour rating must be applied. The load is held for fifteen seconds and the reading should stay above 4.5 volts on a six volt battery/above 9.5 volts on a twelve volt battery. If it drops below those voltages, the battery is bad and should be replaced.

Other potential electrical problems for your classic car

A couple other problems that regularly cropped up for classic car participants during the Glidden Tour were electrical shorts and batteries that would go stone dead overnight.

It is important that all wires or wire looms that go through the vehicle’s metal fire wall have rubber grommets in the holes before wires are installed. A number of cars experienced electrical shorts in this area and resulted in burned wires and, in some cases, fires that erupted at the point of a short. All wires should be kept away from exhaust manifolds and should be secured in place with wire ties. If you have an electrical short that is blowing fuses, a good indicator of where it is can be determined by finding something in the vehicle that is not working.

If the battery is going dead overnight, you may have a parasitic electrical draw by a component that is on when the ignition is in the off position. A quick way of determining if you have such a draw is to remove the negative battery cable from the battery. With everything turned off in the vehicle (including under hood or trunk lights), put a test light between the battery post and the cable terminal.  If it lights, there is a draw. You can now remove one fuse at a time until the test light goes out to determine which component or system is the one at fault here.

Finally, you have probably heard that if you set a battery on a concrete floor it will discharge the battery.  That was true years ago when battery cases were made of a tar paper. This does not happen with today’s modern batteries.

You may be interested in these other posts on Classic Cars