The marine fuel additive galaxy could aptly be described as a group of planets, all named “ethanol gas treatment” revolving around a boat-shaped sun. In other words, one small pocket in a much larger fuel additives universe; one that, unlike our own universe, isn’t expanding at the speed of light. 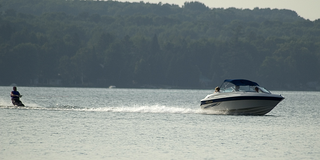 Okay, what we’re really trying to say in that analogy that would not make Neil DeGrasse Tyson proud is that the consumer marine fuel sector only gravitates towards a limited number of kinds of fuel additives.  The fears about having to use ethanol gas in boats is probably the primary driver for boat owners adding fuel additives to their boat’s gasoline.

Many boat owners try to avoid using on-road E10 or E15 gas in their boats.  They pay an extra premium for ethanol-free gas because they have already spent a lot of money on their boats and they want to take good care of them.   The biggest problems with boating fuel are the water issues and possible interactions with polymer components in the boat’s fuel system (from the ethanol in the fuel).  Luckily, some of the better quality marine fuel additives out there are effective at solving these problems. They can stave off phase separation by helping the fuel better able to tolerate the inevitable water absorption that comes from using ethanol fuel in a wet marine environment.

Yet, if you ask the typical boat owner to pick out a good choice to use, that’s really hard to do because there are so many choices out in the marketplace.  They all claim to be awesome or the best ever.  Many claim to do all sorts of wonderful things for very little cost. Read off their list of claims and they claim to do six or seven or eight different things.  What’s a boat owner to do? They don’t want to make a bad choice and, at best, waste money, or at worst, not solve a problem that leads to expensive damage for their boat.

While it’s impossible to go through all of the boat fuel additives out there and vet out each one, there are some good rules of thumb that can help you make a wise choice.  We’ve mentioned some of these in other contexts (i.e. choosing a good ethanol fuel additive), but they bear repeating again here.

If It Seems Too Good To Be True

What we mean here is that if something claims to solve ten different things at a really low treat rate, it’s probably safe to assume that it doesn’t do any of those things very well, if at all.

Treating fuel and solving fuel problems from the fuel side is about chemistry.  As such, there needs to be certain amounts of active ingredients in order for something to accomplish a given effect. It’s really hard for a multifunction boat fuel additive to do a lot of things well if its treat rate is too low.

How low are we talking about? 1:1000 or 1:2000 are good starting points.  These treat ratios (i.e. I gallon of boat fuel additive treats 1000 or 2000 gallons of boat fuel) may seem kind of low, but they’re actually plenty big enough to deliver effective amounts of active ingredients into your boat’s fuel.

Yet if you survey the marketplace, there are some boat fuel additives that claim to do wondrous things at treat rates approaching 1:5000 or even higher.  If you see one of these, it may be wise to pass that by, because it’s probably not going to do anything meaningful in your fuel.  The exception to that is if it’s a single function product, like a biocide.  1:5000 is actually the optimal treat rate for a number of biocide chemistries that can be used in boat fuel to kill microbial growth.  But these biocides also aren’t multifunction additives. They aren’t claiming to kill microbes AND clean the engine AND stabilize fuel AND control water or prevent phase separation.

So our recommendation is to steer clear of these kind of boat fuel additives that try their best to convince you of their worth by overstating themselves.  Good quality fuel additives, whether they’re water absorbers, detergents, fuel stabilizers, or biocides, don’t have to rely on desperate marketing and slick product claims. The bad ones do. Keep an eye out that you don’t get caught by them. Your boat (and its fuel) will thank you.

You may be intererested in these related posts: