A growing number of boat and equipment owners across the nation are bringing to light reports of “brown sludge” clogging their filters and critical engine parts.  One reason for this growing problems could be the unintended consequences of mixing ethanol-blend gas with “pure” gasoline.  When we say pure gas, we really mean gasoline that has MTBE in it instead of ethanol. 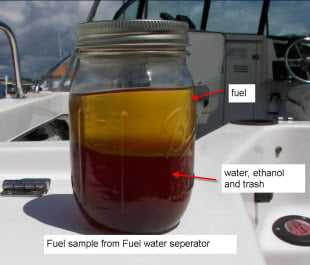 MTBE was added to gasoline in the 80s and 90s, first as a replacement for lead and then as an oxygenate as mandated by the EPA in order to reduce harmful emissions and help air quality.  It was later found that MTBE contaminated drinking water (and made it taste really bad), leading to the widespread phaseout of MTBE from the gas supply in many states.  This is part of what led to the rise in ethanol blending – ethanol was the next best oxygenate after MTBE, so it took MTBE’s place.

While it’s impossible to find MTBE in on-road gasoline anymore (the gas you get at the pump to put into your car or truck), there are some states like Florida where MTBE gas still hangs around in “off-road” gasoline supplies, such as those used at marinas.  They may still use it because they still need to add something to the gas to improve its octane rating. Ethanol would normally be used for this purpose, but boaters hate ethanol, so they used MTBE gas where they can instead.

Because there is still some MTBE gas floating around, you get the inevitable situation where someone, whether an end user or a fuel distributor, adds gas with MTBE to normal gas with ethanol. And that’s where the problem arises.

When you add MTBE and ethanol gasolines together, in practice what forms is a brown slurry that sinks down to the bottom of the tank, formed from a chemical reaction of the ethanol with the MTBE.  Talk to three different people who’ve experienced it, they’ll call it three different things – slurry, goo, sludge, gel.  This slurry has a gel-like consistency and is the mixture of MTBE, ethanol and any existing water from the tank. And when this happens, it puts the boat or engine out of commission, with big repair bills to follow.   It plugs jets and fouls injectors and plugs up the filter in the VST, which causes lean operating conditions for the engine which can do serious damage.