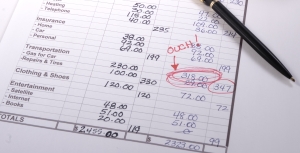 As the stock market rollercoasters continues after the downgrading of the US credit rating, one bit of news that has been lost is that oil prices have been dropping.

Prices for Brent Crude (one type of crude oil) which were holding stready above $115 for most of July and before, dropped to below $100 by the end of the month. While they have rebounded slightly, they're still hovering between $105 and $110 per barrel.

Barrel prices for WTI Crude have also been dropping, from a ceiling of $100 much of the last couple months, to $89 today. This matches what the price was a year ago before financial market concerns caused a steady rise in WTI Crude prices up to $115 per barrel.

So why aren't gasoline prices dropping as quickly as oil prices are? When oil costs go up, gas prices always follow pretty quickly. But the opposite rarely seems to be true. Before we launch into convenient conspiracy theories about why prices go up fast than they go down, it's useful to consider what really does affect the price on the way down.

One things to remember is that oil prices represent about 65% of the cost of gasoline. The other 35% comes from  taxes and refining costs (25%) and the distribution (7%). The remaining 3% is the profit margin for the gas station.

That's right - your gas station makes about 3% on the cost of each gallon of gas.

It's tough to run a gas station. Profit margins are pretty low and stations have to depend upon the sale of ancillary items like chips and soda to break even, in many cases. When wholesale gas prices go up (at the same time oil prices increase), gas stations have no choice but to raise their prices to keep up. They have to. Their margins are so thin, it would put them out of business if they didn't.

When gas prices go down, many times these stations are slower to drop the price. They're hedging their bets. Nobody can predict the future and these stations will use this as a buffer to ensure that they can stay in business.

So in one sense, it is the stations that don't let gas prices fall as quickly as we would like them to. But don't be too hard on them. If they're only making 3% profit on gasoline, you can hardly blame them.