Bell Performance Shows How to Reduce Friction in Engines

The friction brake machine test is an excellent demonstration of the friction-bearing properties of the Bell Performance X-tra Lube Oil Treatment.  The treatment contains micro-metallic particles which physically bond into the metal surfaces it contacts. The particles fill in the microscopic grooves, peaks, and valleys that all metal surfaces contain. In practice, this results in a situation where treated metal slides against treated metal, with resulting friction and wear being substantially reduced.

This effect is noticeable, quantifiable, and demonstrable in the friction brake machine test.

The “friction brake machine” test is a demonstration of the load-bearing capacity of a lubricant. It utilizes a specialized apparatus called a Friction Brake Machine, hence the name of the test.

The machine consists of an electric motor which powers a spinning steel flywheel. A torque wrench with a steel Timken bearing can be laid to rest on the flywheel, creating a point of friction where metal contacts metal (the flywheel and the bearing). A small oil sump is positioned under the flywheel; when lubricant is added to the sump, the flywheel (and the metal-metal point of contact) receives lubrication.  Pressure may then be applied to the torque wrench, which transfers the force to the lubricant at the metal-metal contact point.  As force increases and the lubricant is “taxed” up to its maximum capacity of bear friction and load, noise and vibration increase.  The force applied can be measured on the torque wrench in ft-lb units.

At the same time, friction at the contact point will create a “wear scar” on the Timken bearing.  The size of this scar is a function of the amount of force applied, the friction- bearing ability of the lubricant and the length of time the two metal surfaces contact each other.

The second result of the test is the size of the wear scar on the Timken bearing. Smaller scars are indicative of better protection at the metal-metal contact point by the lubricant, all other things being equal.

Running a friction brake machine test with both unadditized oil and yields some notable test characteristics.

1. With untreated oil, there will be a great deal of noise and vibration as the force increases toward the stopping point of the test.  This is due to excessive friction and metal-metal contract immediately preceeding the force exceeding the film strength of the lubricant.
2. With Bell Performance X-tra Lube, as the force is increased gradually from zero through 30-40 ft-lbs, there is a point where the noise and vibration noticeably stops. This is the point where the metallic particles of the oil treatment bonds into the metal surface, reducing friction.  After this happens, the force may be increased substantially.
3. Once the X-tra Lube metallic particles have been bonded into the metal surface, the test may be continued up to the point where the heat of the test is great enough that the oil itself will burn off, creating a large amount of smoke.  However, at the same time, the flywheel will keep spinning, because the bonded metallic particles are continuing to provide residual lubrication even as the ft-lb of force is several times greater than the capacity of untreated oil.

A typical commercially-available engine oil stops between 15-30 ft-lbs of pressure. 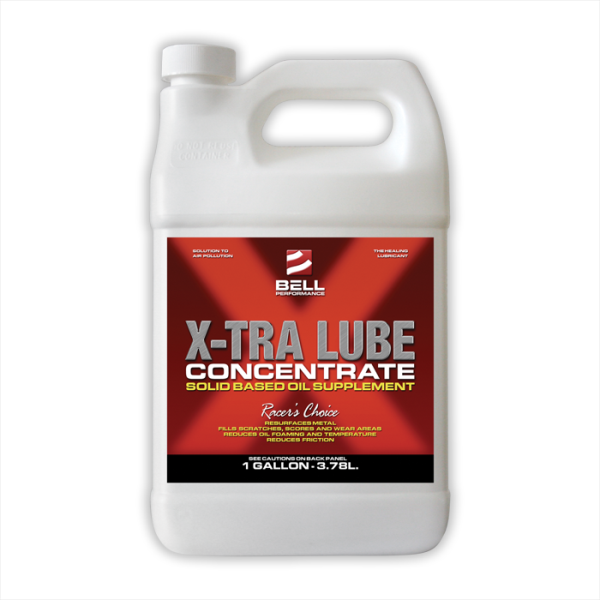 Wear scars of X-tra Lube tend to be several times smaller than scar sizes for untreated oil, even with greater force applied.

X-tra Lube Concentrate also contains a premium platter of additive ingredients to improve oil detergency, clean metal surfaces and protect surfaces during start-up. Mix with your choice of oil and substitute for your final quart of oil during your oil change.