Ethanol critic talks about the end of the Florida Ethanol Mandate

Earlier in 2013, Florida Gov. Rick Scott signed into law a state bill repealing the ethanol mandate for the state of Florida. The consequences for this action were not that all ethanol was now banned at Florida gas stations, but it did eliminate the requirement for Florida gas stations to sell ethanol in the first place. The result of this, in theory, is that drivers would have more choice because more gas stations would now be in a position to sell regular gasoline.

At the time, this was big news and a lot of people had a lot to say about it. Not long after passing, the Orlando Sentinel newspaper interviewed one of the more vocal critics of ethanol fuel – Charles Drevna, the president of the American Fuel and Petrochemical Manufacturers Association.

You can find a reference to this interview on the Orlando Sentinel website, but we figured to give you a brief rundown of some of the comments and clarifying statements that he had to say about the new ethanol rule and the critical parts of the issue that might be a little confusing for the average person.

Question – what is the renewable fuel standard that everyone talks about?

Answer – the Renewable Fuel Standard (RFS) is a Federal law that was established in 2005, and requires (mandates) increasing amounts of biofuels like ethanol and biodiesel to be blended into the national gasoline supply. The goal of the RFS was to protect the environment and reduce our dependence on foreign oil.

Question – how does this RFS mandate impact consumers?

Answer – it impacts consumers because ethanol contains less energy than gasoline, which means consumers get fewer miles per gallon and have to use more fuel. Which, of course, means they pay higher effective prices at the pump. There's also the issue of ethanol damage to equipment. And there's the issue of how making a high amount of ethanol causes food prices to go up. In 2012, the average American family of four spent $2000 more on groceries compared to what they were paying in 2005. At least some of that increase can be directly tied or traced back to how ethanol fuel has negatively impacted the food market.

Question – why is this issue gaining prominence? Is there a reason why people suddenly care about this?

Answer – more and more people are realizing that this Renewable Fuels Standard is not having the benefits that it was intended to have when they brought it into law. They also realizing that the blending requirements of the law are impractical such that the ethanol lobby is campaigning to have them changed. The word is out on whether the EPA will actually do this, actually amend the mandates.

Question – with respect to Florida eliminating the ethanol mandate, will that have any actual benefit to Florida consumers? 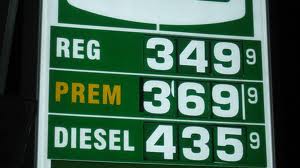 Answer – the passing of the law in Florida is really a symbolic evidence that government policymakers are starting to recognize the unintended consequences of what they have been requiring with the ethanol fuels. The repealing of the mandate in the state of Florida would have a lot more teeth if the Federal mandate was repealed at the same time. But whether that's actually going to happen, remains to be seen. If the Federal mandate is not repealed, then Rick Scott's actions in Florida will have little impact on consumers at the state level.

Question – so if you're not in favor of ethanol, are there better policies we should be looking at to reduce our fossil fuel use?

Answer – groups like the American Fuel and Petrochemical Manufacturers support goals like increased fuel efficiency.  They also support, in principle, the responsible integration of biofuels (ethanol and biodiesel) into the gasoline supply. However, the big difference between groups like these and the ethanol lobby is that groups like the American Fuel and Petrochemical Manufacturers would like to see consumer choice driving the change, rather than government edict. Consumer choice should be what determines the right mix for consumers with respect to the fuel choices available when they go to the gas pumps.