Part of the reason ethanol gas is so distasteful to so many is because the whole thing reaks of politics.  The politics of Congress dictating to average people what they can and cannot do, what they should and should not do.  At a time when the country is more polarized than ever, the ethanol issue becomes a prime example. 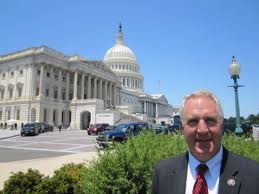 Politics is entwined in the history of ethanol in a way that's impossible to seperate, like a Gordian Knot. Before the fuel price shockwaves of the 1970s, nobody gave ethanol much thought in fuel even though the earliest cars like the Model T could run just fine on ethanol. The cheap gas of the 40s, 50s and 60s saw to this.  When gas prices went up in the 1970s, Congress established a precedent by writing subsidies into law that gave tax dollars to oil companies for blending ethanol into fuel.  Cynics will note that this isn't the first time the taxpayers would have to pay twice for the ethanol issue at the same time - once through high gas prices and twice through more tax dollars being given to the same oil companies already making money off high gas prices.  And meanwhile the politicians benefitted by going around telling everyone how much they cared about the environment because they supported "renewable energy".

Okay, let rewind a moment.  Environmental consciousness is more a product of the 21st century than it was in the 1970s.  So let's backtrack.  Cheap gas prices in the 1980s again made ethanol an afterthought.  Now ethanol was just an alternative to MTBE.  Production of it at the time was also concentrated mostly in the hands of giant producer Archer Daniels Midland, who no doubt contributed many many dollars to reelection campaigns in thanks.

The Renewable Fuel Standard law from Congress (8 billion gallons of ethanol in the nation's gas by 2012 was the law) and high gas prices in the 2000s created a new rush to make ethanol.  Now everyone was rushing to make ethanol because Congress was back to offering 54 cents a gallon in taxpayer money if you would make and blend ethanol in gas. The tax break stopped at the end of 2011 (not enough money in the budget for the politicians to give away) but the modern day gold rush had seen the proliferation of small to mid-size ethanol producers who wanted to jump in on the action.  Just as interesting as this is the shift in political stance by those on both sides of the issue.  It's well known that Al Gore was a big advocate for ethanol when he was Vice President.  Now he's going around telling us ethanol is bad for the environment and blaming political pressure from his friends in the Midwest for what he was saying earlier.

But let's not make the mistake of blaming Democrats alone (who are traditionally more sensitive to environmental causes). Former Republican presidential candidate John McCain has flipped several times on the issue since even as early as 2000.  And Hillary Rodham Clinton (going back to the other side) used to vote against ethanol mandates but later supported as Senator spending a billion dollars on "ethanol research".  One thing's for certain. You can probably trace the pattern of who's for and against ethanol by looking on the calendar.  If it's political primary season and the Iowa caucus is coming up, you better believe everyone loves ethanol.

Looking ahead, the latest political volley comes from new legislation passing through Congress that eliminates any liability claims from engine damage for ethanol makers.  This is one of the steps paving the way for the final full scale rollout of 15% ethanol in the nation's fuel supply. For now, this E15 will only be "approved" for vehicles newer than 2001 (and not approved for boats and small equipment like lawn mowers and generators).  That leaves E10 to be used by everyone else.  There are those in the ethanol industry who think 10% ethanol is a wonderful idea.  But input from the consumers in the marketplace who have seen lawn mowers rendered inoperative by ethanol and seen their gas mileage drop off will probably beg to differ.