Thinking about propane additives in cold weather - ways to improve

Propane heating fuel is good stuff. And that's great news considering that the United States and Canada have access to more natural gas resources than Saudi Arabia has oil. We have so much natural gas available that the cost of it ends up being way below the cost of other fuels like fuel oil - which is why a lot of power generation facilities use natural gas and propane almost exclusively to generate electricity for their customers.

One advantage propane fuel has over fuel oil is that it is a cleaner burning fuel that gives off fewer emissions. That's not to say there's no room for improvement with propane - there are areas where, for example, one could use propane additives to get the most out of the fuel. For example, a homeowner with a propane furnace might use an opportunity to use propane additives to clean their furnace system and increase the heat coming from their gas flame.

Since the weather is turning cold and much of the Northeast is firing up their home heating systems, here's some areas to think about.

Heating systems using fuel oil have significant and obvious areas that can be touched on by fuel treatment, such as black smoke problems at startup and the development of residues left over after the burning of the oil. These are why many fuel oil customers treat their storage tanks with an additive.

What areas of improvement do residential and industrial propane users have?

While it doesn't have the larger scale soot and deposition problems that heating oil has (because propane and natural gas are much smaller molecules that burn more completely), many propane users report seeing deposits in the "converter" areas of their burner systems. An LPG-powered vehicle utilizes a converter like a carburetor to achieve a mix of gas and air to be burned. A furnace system will have a similar area to do the same thing. This is the area which can see a buildup of deposits that start to affect system performance.

Where do these deposits come from if the gas burns so cleanly? Commercial-grade natural gas and LPG is a mix of several kinds of gas and typically contains small amounts of heavier contaminants. Most LPG is 'spec'd' to allow for a maximum amount of this. It is these larger trace contaminants that may react and buildup in these areas.

Adding a fuel treatment to an LPG- or propane-storage tank while add detergents to the compressed gas that work to clean that deposits out and restore the furnace system to more of its peak efficiency, in much the same way that detergents in gasoline or diesel do for cars and trucks.

Flame color is an indicator of temperature and efficiency. If you have a gas stove and you turn the burner on, you know that a nice blue color means you're getting a nice complete burn and lots of heat.

When the flame turns orange or other colors, it's an indication that, whether it's not getting enough oxygen or for some other reason, the gas is not burning completely and the flame temperature actually goes down, with obvious effects on the system's ultimate efficiency. 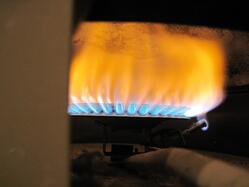 There are fuel treatments which, again, may be added to the bulk gas storage tank, that contain catalysts to ramp up the heat release of the fuel. A good treatment may use organometallic catalysts to do this - get an catalytic improvement of the heat release. Propane users who have noticed that their system flames don't always appear to be at their "bluest" might consider this.

This is not to say, however, that a simple propane fuel treatment can give you 110% performance on a 100% scale. There's so much out there with respect to fuel treatments of every kind, that some products will make whatever outlandish claim they think they have to in order to make a homeowner part with their money. A propane additive isn't going to raise your furnace's efficiency by 50%. But it probably will give you back enough of the efficiency the system has lost over the years that you'll save several times what you paid for it. And that's really the definition of success.

So if you are considering something like this, talk to your fuel distributor or supplier. Or, better yet, have them talk to us.