Florida Ethanol Mandate Gets The Boot From Governor Rick Scott 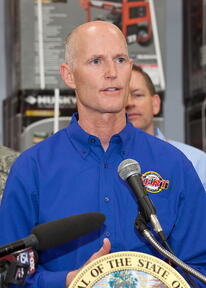 We wrote a draft of a blog post last week talking about how Florida Governor Rick Scott had a bill (H.B. 4001) on his desk to sign that would eliminate the Ethanol Gasoline mandate in the state of Florida.

Due to developments over the weekend, we had to do a quick rewrite, because Scott signed the bill on June 1st.

At the time, Gov. Scott had a decision to make regarding ethanol gas and helping to solve ethanol fuel problems for Florida drivers and boaters.

The passing of the Florida Senate Bill 320 on April 24th  meant Governor Scott had to decide whether to sign into law somethiing that eliminates the requirement for fuel distributors in Florida to sell gasoline blended with ethanol.

It's not clear at this time how the results of the law will interface with federal requirements for reformulated gasoline that have been the driving force behind ethanol in our fuel supply. But because Gov. Scott signed the bill into law, drivers and boaters in Florida will likely breathe a sigh of relief.

What The Florida Ethanol Repeal Means

The main effect of the law is that Florida gas stations won't be required to sell gasoline containing ethanol. Florida gas stations would still have the option to sell ethanol-blended gasoline if they want. So it won't make ethanol fuel go away entirely in Florida, but the new law will mean more and more gas stations will choose to offer 100% gasoline alongside E10 pumps in the future. According to pure-gas.org, there are currently 402 gas stations and sellers in the state of Florida that offer "pure gas". That's only about 8% of over 5,000 total locations to buy gas in the state.

The move to blunt ethanol's effect in ethanol have been more than a year in the making. The original ethanol mandate in Florida came in being in 2008.  Last year (2012), State Rep. Matt Gaetz started the anti-ethanol policy ball rolling by successfully passing a rule that dictated Florida gas stations could not be penalized simply for selling ethanol-free gasoline (if they were selling it alongside the then-required E10 gas). Now, Governor Scott has gone the extra mile by signing this more comprehensive legislation in law.

Florida is by no means the only state to be challenging this issue at the state legislative level. We've already talked about Maine passing legislation to ban E15, and other states like Virginia also have similar laws under debate. These kinds of bills could go a long way to helping ease ethanol fuel problems in those states.