The times have changed and so has the name. Bell Laboratory. Bell Additives. Bell Performance. Three names which have come to signify quality, value, problem-solving and innovation to thousands of consumers around the world over the last 100+ (actually now 104) years. We invite you to sit back as we go through history decade-by-decade and also throw in a few tidbits about what we at Bell were doing while the world was changing around us all.

The 1940s is when we really start to see the development of some notable things that have lasted through the years. The McDonald brothers kicked off the decade by changing around their hamburger stand and introducing the Speedee Service System.  They did alright by themselves with their little shop, but it took Ray Kroc buying them out a few years later to take the name "McDonalds" to every street corner. 1941 was the year Forrest Mars patented a proces to coat chocolate pieces with a hard candy shell. This enabled American troops to eat chocolate on the battlefield and brought the name M&Ms to the hearts of every schoolkid. 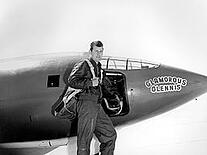 After WWII ended, the US and British governments got together and shared some technology secrets. It wasn't long before the XS-1 rocket-powered aircraft was born. But most people thought the sound barrier could not be broken (remember the discussion in the film The Right Stuff?). But Yeagar dropped out of the bomb bay of a B-29 bomber and guided his XS-1 airplane (he called it Glamorous Glennis) through a shaky but historical flight topping out at over 800 mph - the first fully documented case of going faster than the speed of sound.

Mr. Bell Gets Back To Work

The country’s exit from the Great Depression in the 1940s opened up new marketplaces for
creative minds like Robert J. Bell. From his laboratories in Orlando, Mr. Bell developed
numerous products in the decade, targeting problems that he had seen and heard about from
consumers. Already having one successful flagship product, Robert Bell expanded his product
line with new products based on the top technologies of the time: 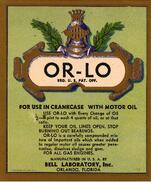 OR-LO – This oil additive for gasoline engines was described by Mr. Bell as “a carefully compounded mixture of important oils which, when added to regular motor oil, causes greater penetration and dissolves sludge and gum.”

OR-LO TUNE UP – This derivative of Bell’s base OR-LO product was designed to be used in both the lubricating oil and also dissolved in gasoline. OR-LO TUNE UP provided consumers with extra cleaning power to dissolve carbon and gum in their engine while helping start their
vehicle in cold weather.

NO-DRAG-OIL – This supplement for oil and grease “removes and cleans gum, carbon, scale and sludge from bearings and lubricating parts, keeps machinery running smoothly by removing drag and strain, cuts down power and maintenance costs.”

BELL’S 1776 PENETRATING OIL – This precursor to the modern standard WD-40 – “It saves
time, labor and parts in loosening bolts, nuts, bearings or other tight metal parts…every home
should have Penetrating Oil on hand for cleaning sewing machines, old machinery and farm
implements.”

B-17 RADIATOR CLEANER and LEAK-NO-MO – These were treatments developed to solve
radiator problems in vehicles, protecting them from corrosion and leaks.

Robert Bell’s innovations in developing problem-solving products for his customers had, by
now, resulted in a full line of offerings. A consumer with virtually and fuel- or oil-related
problems could now look to the Bell Laboratory company for cost-effective solutions that
worked. That was true then and it is still true today.

Look back at Chuck Yeager's breaking of the sound barrier. Once it had been broken, lots of other people surged past it relatively quickly. Performance and design innovations developed during the runup to a historic event quickly get adopted and become commonplace, bringing up the performance of everyone else. That's how the quest for excellence works. The rest of the world reaps the benefits brought by the innovators. Innovators like Robert J. Bell

During the Decade of Conformity, Mr. Bell impacts another emerging market with one of his
inventions. Join us next week to find out just which market that was.