Bell Performance - over 100 years of innovation. Bell Laboratory. Bell Additives. Bell Performance. Three names which have come to signify quality, value, problem-solving and innovation to thousands of consumers around the world over the last 100 years. Join us for a weekly blog as we review Bell’s rich history decade-by-decade.

In 1919, French hotel owner Raymond Orteig issued a $25,000 prize for the first person or people to complete a non-stop flight from New York to Paris (or vice-versa). The prize went unclaimed for almost 10 years until one man stepped into the fray to claim it - the relatively unknown Charles Lindbergh.

This was not the first trans-atlantic flight to have been attempted or completed; a handful of crews had completed flights in airships (balloons or blimps) and one crew even crossed the ocean in an airboat, though with multiple stops on the way. But the fixed-wing airplane was the wave of the future, and Lindbergh sought to be the first to across the ocean nonstop in one of them.

Not that he was the first to attempt it and win the prize. The “Orteig Prize” led to 40 attempts in the summer of 1927 alone, all unsuccessful, with 21 deaths resulting. Lindbergh was undeterred by the danger and even made some unusual strategy choices in preparation: flying solo (to avoid personality conflicts), ditching nonessential equipment like a radio and parachute to save weight (though he did bring an inflatable raft) and flying into unclear weather conditions.

Lindbergh’s successful nonstop crossing, over 33 hours, won him the Orteig Prize and the fame and admiration of millions across the world. Before the end of the year, other pilots, spurred on by Lindbergh’s feat of performance, would break his records

By 1927, the auto industry was in full swing and expanding, with Chrysler and General Motors providing stiff competition to the still-dominant Ford Motor Company, which produced more cars than anyone else. It was clear that the automobile was here to stay and would be an integral part of the growth of this nation.

Meanwhile in Virginia, Robert Bell was conducting research and experimentation on a product which would revolutionize the fuel additive industry. Having experienced success with his original product for gasoline, O-M-I-GO 76, his new product would be multi-functional and specifically formulated to solve all fuel-related problems. This it did – better than any other additive on the market. 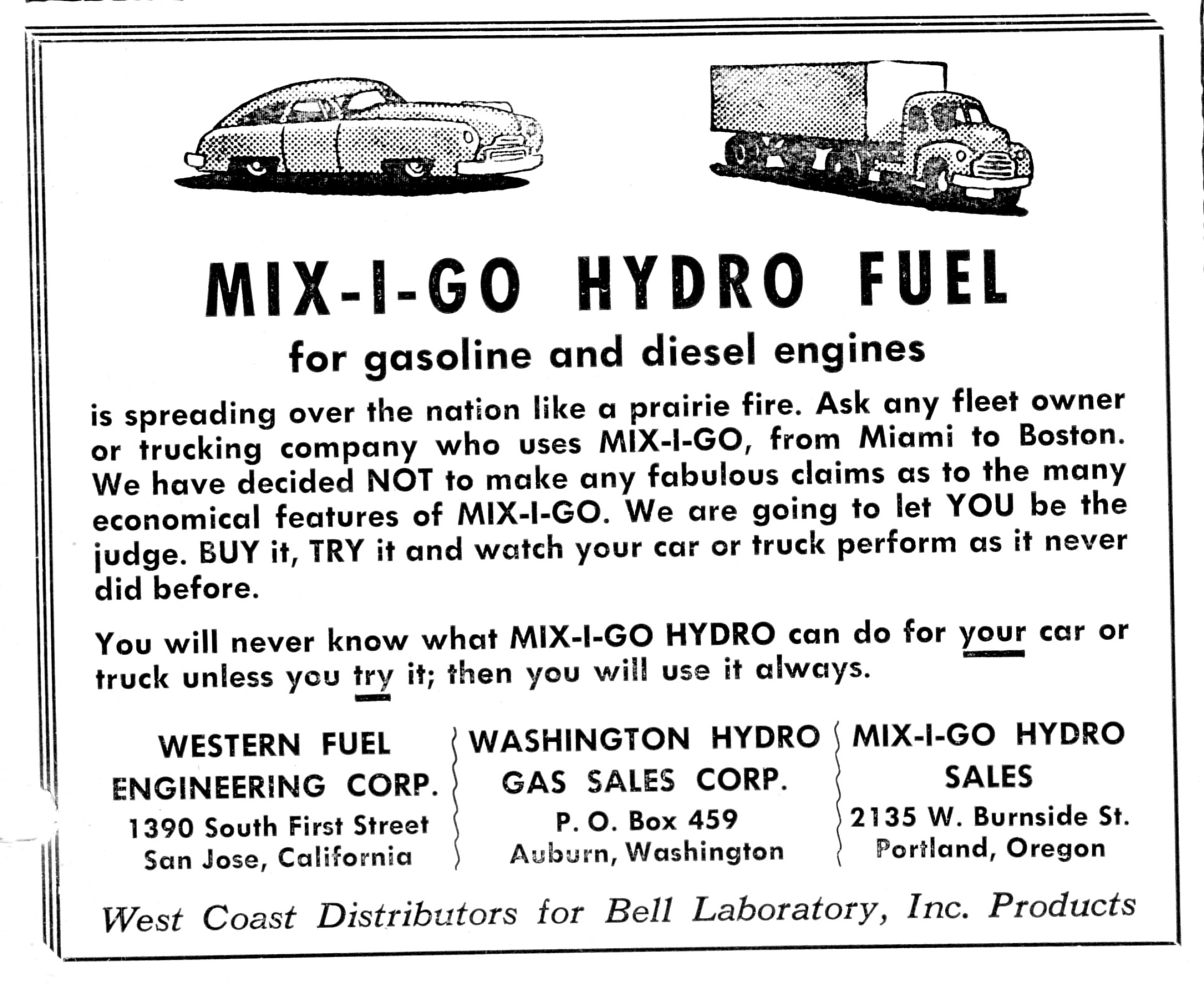 In 1927, Bell succeeded in formulating the world’s first multi-functional fuel additive, calling it “Mix-I-Go.” This advanced fuel treatment contained a unique blending agent which allowed water to mix easily with fuel, so that natural condensation in the gas tank would pass through the combustion process without damage to the engine. This innovation made Robert Bell the first person to successfully suspend water in fuel. This would have great implications for the consumer, many of whom were experiencing problems caused by water contamination of gasoline and (later) diesel fuel. In addition, Mix-I-Go was designed to clean the entire fuel system of carbon and other deposits, as well as lubricate the valves. The results for the consumer of this new formulation were increased mileage, better performance, reduced emissions and longer-lasting equipment.

This new formula launched the multi-function fuel additive industry. Many products would follow but none of them would be as effective or revolutionary as the formula Robert J. Bell rolled out onto the market in 1927. The Mix-I-Go formulation has been updated over the years to meet the needs of ever-changing fuel quality, and it remains our flagship product.

As the decade closed, something loomed over the great nation of the United States - The Great Depression. Join us next week to see what was in store for Bell and the nation in the 1930s.