It seems to be a best practice recommendation for motorcycle owners (and other kinds of small engines) to run the engine at least every couple of weeks until its warm. The inference 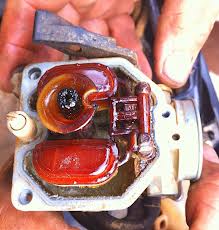 in this is that you don't want to let motorcycles and small engines sit for weeks at a time with ethanol fuel in them.  Today's ethanol fuels are magnets for water and the problems that come along with that.  Water buildup in the fuel means phase separation (where the ethanol splits away from the gasoline it's mixed with and sinks to the bottom, taking away the gasoline's octane along with it). It also means corrosion and damage to fuel lines and seals. Plugged injectors also come with the territory, unless you've taken the proper precautionary measures.

Turning Your Fuel Over

Turning over the fuel by running the engine every so often is a good way to stay on top of this potential problem.  There are also motorcycle fuel stabilizer options out in the market place that (purport) to stop these ethanol-related problems seen in sitting fuel.  Many bike web sites particularly recommend using a motorcycle fuel stabilizer if you have a carbureted bike with a steel fuel tank. This is good advice because the passages and jets of the carburetor can easily can plugged by the varnishes that come out of bad fuel as it ages. These sticky varnishes are the heavier components of the gasoline that used to be in solution with the rest of the fuel. But when the gas got "old", it became unstable, and the heavier portions of the blend are what come out and deposit first, in the form of gums and varnishes. And so they cause problems for carbureted motorcycles.  A fuel stabilizer for motorcycles, therefore, is essentially to prevent this from happening.

Make Sure You Clean The Water Up, Too

It used to be that you could use just a stabilizer or antioxidant product.  But with the explosion in ethanol blends, you now have to have both something to keep these gums and varnishes in solution, but also something that cleans up all of that attracted water.  The colder it is (like, right now), the quicker you will run up against water-in-ethanol problems like phase separation because it takes even less water to break up an ethanol blend when it's cold. It also helps if this ethanol fuel treatment also interrupts or slows the dissolving corrosive action that the ethanol is going to be having on the metal, rubber and plastic parts inside the bike.  Many a bike owner over the past couple years have has nasty surprises after leaving their bikes sitting with ethanol gas inside.  Something in the fuel treatment that will coat and protect rubber and plastic parts will do the trick.

If your bike has been sitting this winter and you didn't winterize it properly, it may be worth your while to check on it and put some fuel treatment in it before it's too late.

Looking To The Future

Don't look now, but some states like Minnesota are already looking ahead to a possible increase to 20% ethanol.  This has groups like the American Motorcyclist Association very worried.  When asked to comment, the AMA said "The AMA supports the use of cleaner-burning fuels, but we are concerned about premature engine damage or failure while a bike is being ridden on a highway if the allowable level of ethanol is raised to 20 percent,"

If they do switch to 20%, using ethanol fuel stabilizer in you bike fuel will become even more essential.